During the time men live without a common power to keep them all in awe, they are in a condition which is called war, and such a war as is of every man against every man. -- Thomas Hobbes, Leviathan, Part 1, Chapter 13.

"I swear by God this sacred oath that to the Leader of the German empire and people, Adolf Hitler, supreme commander of the armed forces, I shall render unconditional obedience and that as a brave soldier I shall at all times be prepared to give my life for this oath.". -- The Wehrmacht Oath of Loyalty to Adolf Hitler (August 2, 1934) 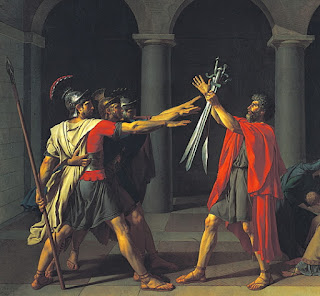 Oaths Pursue Loyalty. Loyalty is commonly understood as constancy of commitment to a person, idea, or institution. In many cultures, across the centuries, oaths, vows, promissory notes, contracts, and ceremonies employing similar documents and procedures have been used both

a. to “convince” their sponsors that those making the oath, promise, etc. will, in fact, behave as indicated sworn to in the ceremony; and

b. to provide the oath-takers justification for their obedience and conditions of sanction should they violate it.

When the acknowledged controllers (the pledgees) of organizations wish to call their subjects to obedience, they invoke such things as fidelity, faithfulness, constancy and commitment, demanding, indeed, coercing oaths, vows and the like to help the oath-takers (the pledgers) meet “their” goals and expectations. It is common rhetoric to refer to a collective, e.g. we, our, society, humanity, the corps, the race, the nation, etc. to disguise the often very individual pursuits of an Autocracy.

Even in nominally democratic societies, leadership groups tend to favor laws, pledges and the like that support their continued incumbencies. Gerrymandering, poll taxes, restrictive identification procedures, extension of the definitions of felony to many victimless crimes with consequent disenfranchisement of offenders, for example, have been used throughout the United States to maintain incumbency. (See A Leader's Primary Pursuit: Incumbency)

A Delusion of Lawfulness? It may appear that promissory customs are, in fact, rites of reciprocal self-delusion: the pledgee can trust the pledger to obey the conditions of his oath; and, the pledger can rely on the pledgee to provide benefits of some sort, or refrain from inflicting costs on the pledger. Trust abounds. And Trust is Good. (See Bestowing Trust.)

But pledged behavior has hardly the certainty of natural law. Oaths, promises, vows, and contracts help support a hope, an illusion, a Myth of Reliability, that the world need not be as chaotic, as whimsical a place as our experience tells us it is. Psychologically, promises and oaths are a comfort, as much an act of faith on the part of the recipient as on the part of the promiser. (Think of wedding vows.)

The Nonconforming. Many people actually seem to feel they are “bound” by their oaths, their promises, but history shows these are rarely members of powerful elites. In much of the World, might makes right, especially if religious leaders throw their weight to support the mighty. However, those who can exact pledges do take precautions, which shows they are not taken in by any delusion of trust: they establish or support enforcement cadres, e.g. military or police forces -- secret or otherwise --, or offices of indoctrination, often called “educational systems.”

Nonconformists can expect to be, initially, cajoled by invocations of pledges made, vows taken, or contracts signed. If disregard persists, one or another of the Faiths of Someone’s Fathers will be enforced with dungeon, fire or sword. To add insult to injury, resisters will be called, disloyal, sociopathic, criminal, turncoat, traitor, heretic, etc.; such names, otherwise perhaps not hurtful, are used to justify the sticks and stones that break their bones.

The mechanisms of control vary from threat of execution to unspecified lesser punishments: e.g. loss of rights or privileges, social opprobrium, self-shaming. In Nazi Germany, men were conscripted into the Wehrmacht, willy-nilly, and thus subject to the oath given above. Many, many who resisted were summarily executed.

“Criminality,” if Punished, May Serve Some of the Submissive. The submitters who benefit substantially from the “protection” offered by pledgees welcome, if only secretly, the punishment of criminals and resisters “properly” caught. The servants of autocrats fear, often as much as their masters do, the revolt of the masses.

The existence of revolt warns the pledgees that their promises, minimal though they be, ought be fulfilled if only to forestall more widespread resistance. Thus, oaths and promises, unless under extreme conditions, e.g. martial law, though they offer the semblance of shared faith, in fact rest on the tension of mutual mistrust.

The Issue of Choice. Morally considered, oath-taking, if not done under compulsion, is a choice, which incurs responsibility. But it may also be a habit inculcated more or less subtly with social pressure. I remember being coerced, as an eight-year-old, during church services into taking an oath to not ever go see the film, “The Moon is Blue.” I didn’t even understand what that was about. But I did what I was told. (As the twig is bent, so grows the tree -- supposedly.)

Overt coercion is often, in our society, recognized as invalidating the oath or the contract. (Except, it appears, if those compelled to pronounce pledges are public school pupils, or military draftees.) But it is confusing to many that the oath-taker may not be not relieved of responsibility of crimes he commits in following orders obeyed consequent to the oath. Winners in battle define the atrocities of losers as “crimes.” Their own misadventures are described, at worst, as “collateral damage.” 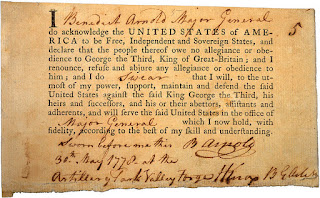 Should we, as rational people, choose to renege on our oaths, promises, vows and contracts as whim dictates? Nothing so far considered leads us to this conclusion. But it should nudge us to consider occasionally reviewing our promises, etc. and acting as our enlightened self-interest permits -- not merely our whims, impulses or urges -- in re-evaluating, perhaps, even, disregarding them. You can bet our political, religious and social “leaders” do this all the time. Historical examples, recent and ancient, abound.

The key consideration for the conduct of interpersonal affairs is that the activities of people can harmonize without their ideas about ends and means being in agreement – Nicholas Rescher Pluralism (1995) Oxford. p.180

Hobbes got it wrong. Lacking common compulsion we need not lapse into a war “of every man against every man.” Enlightened self-interest, which includes taking into consideration the interests of those people and institutions we love and admire -- or, even, just tolerate -- would likely do the job as well as the coercion, the dungeon, the fire and the sword of any Leviathan.

“It is not the oath that makes us believe the man, but the man the oath.” – Aeschylus (5th Century B.C.)