Are Humans Rational? What’s At Stake? 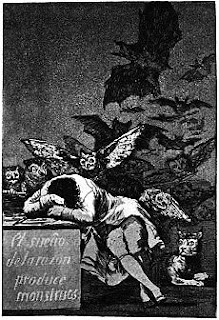 ..(we) retained utility theory as a logic of rational choice but abandoned the idea that people are perfectly rational choosers. -- D. Kahneman , (2011) Thinking: Fast and Slow, p.314

Reason is not a Tribe --Circle of Reason

…the growth of organizations themselves may create conflict where no previous consciousness of conflict existed. -- K. Boulding, Conflict and Defense: a general theory. (1963, p. 145)

What’s at stake? The dream of almost every “leader” in the history of mankind: subjugating others without feeling guilt, or without provoking moral opprobrium. Adding to the many god-given missions, we find: cultural superiority, Manifest Destiny, tribal primacy, economic efficiency, saving democracy, mental-physical health, Critical Thinking, beauty, racial purity and school reform. Throughout history these ideas have been used to separate people as worthy or unworthy of respect, social acceptance, or, even of life itself.

Into this crowd of ideological slogans struts Rationality, of ancient and solemn pedigree. Rationality has been recently refurbished as a touchstone of practical and moral dominance for a new crusade, which like many of its predecessors, will identify those to be privileged and those to be subjugated.

Many of Rationality's present enthusiasts pursue the dominance of a “Tribe of Reason.” This tribe is presently a loose confederation that, once achieving dominance, will likely struggle among themselves to createa hierarchy of "professions" -- with the usual assymetrical distributions of privileges and obligations. (A good deal of this sorting out and privileging has been done already in higher education.}

Every organization, every profession in our society has a stake in being perceived as a member of the Tribe of Reason in order to safeguard its economic opportunities, if not its moral status. (See, for example, America’s Interfaith Structure ) Rationality makes intolerance of so-designated Irrationality morally acceptable.

Even the most-focussed human minds encounter major impediments, both psychological and social, to rationality, the optimal pursuit of what they value. And theorists have long hoped to clarify rational action by seeking to mathematize notions of rationality. But they have met with mixed success. (See Kahneman, cited in epigraph and also, Is It Reasonable to Be Logical?)

The ephemerality of thought and the oscillations of taste and mood seem to offer no small reasons why thought processes appear more or less random and why decision appears to decay away from standards of optimality, e.g. utility theory(!) But is apparent randomness really irrational decay? Or, actually, a manifestation of values pluralism? Why must cultural variation or mental vicissitude diminish the status of persons or organizations to the point of being in need of, or open to, subjugation?

For references and to examine these issues further, see Pluralism and Rationality: the Limits of Tolerance