An Ancient "Ghost", Yet to be "Exorcised": Precision

Indicate precisely what you mean to say,
Yours sincerely wasting away.
-- Paul McCartney, "When I'm Sixty-Four"

A Comparison? An interesting picture is given by McCartney's lyric: there is

a. something that a person means to say; and, also, a second thing that is
b. an indicator of that something meant.

What is being asked for is precision of the indicator to the meaning. But how would we judge that?

If I ask you to tell me precisely how long your left foot is, you grab a rule and hold it alongside your left foot and make a comparison with your heel at the beginning of the number scale and the measurement mark most in line with the end of your toe. We know how to go about that.

But what kind of comparison can we make between what you mean to say and something offered as an indicator of it?

This is a problem very similar to what we encounter if we believe that when we read aloud a text, we are describing the thoughts of its author. What can we compare? Can we independently get at the author's thoughts to see if the words he chose are "fitting" to them? (See "An Ancient View of Authorship".)

Impossible Correspondences? This is actually an old chestnut in a different guise: the correspondence theory of knowledge. If we imagine that "knowing" indicates a correspondence between your thoughts and "objects in the real world" we face the problem how we can determine that that correspondence exists. And why would we ever want to "correct" ourselves?

But, actually, we have a very similar problem with our foot and the ruler. Some rulers are scored in full inches; others, in fractions of the inch. We are trained to think that using a finer scale gives us more precision. Sometimes it does. But consider this: what happens if the length of something varies depending on the fineness of the scale we use to measure it?

Things like that don't happen, you say? Wrong. Measure any natural coastline. Begin by indicating its length in miles but stepping a mile long ruler (do this on a map) from one end point to the next. If you use a 1/2-mile long scale the coastline measurement will INCREASE! Why? Because you will catch more variations in the coastline at a half-mile than at a mile. 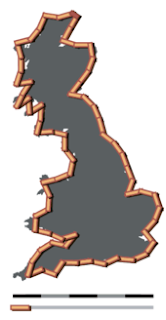 Increase the fineness of the measurement scale and the length of the coast will increase even more as every little brook and stream and inlet gets marked by that scale. Theoretically, it would seem that every coastline expands to infinity as our scales become finer and finer -- except for the fact that as we approach molecular levels there would be variation, if not confusion, as to what would be the length of the coastline.

(You can check this out on Wikipedia at "How Long Is the Coast of Britain? Statistical Self-Similarity and Fractional Dimension")

Is This Proof of No Meaning, No Knowledge, No Length? Not at all. But it does show that the ideas of precision that were drummed into us as part of our basic education deserve a more critical review than we might think.

If you've ever wondered what the criticism meant when you were told that your speech, or your writing or your ideas were "imprecise," you were not exhibiting stupidity. What precision is, exactly, as regards speech, writing or thought, is seldom explained: either from lack of knowledge on the part of the critic; or, from the critic's desire to maintain a position of dominance over you -- no doubt for reasons of "moral discipline."

In much schooling, quantification is appealed to precisely because it seems to enhance "precision" in discussion and investigation. However, Deborah Stone offers some telling criticisms about this practice especially as it is used to support the domination of some people by others. See for example, "Using Quantitative Procedures Wisely".