Knowledge --The Residues of Practical Caution:
a pluralistic epistemology?


I knew very well that I possessed no knowledge at all worth speaking of. -- Socrates[1]

All epistemology begins in fear -- fear that the world is too labyrinthine to be threaded by reason... -- Daston & Galison (2010)[2]

Knowledge Worth Speaking Of. Many people among those thought to be authorities on the matter claim that Socrates made a bald-faced self contradiction by saying, “I only know that I know nothing.” But he never said that. Actually, as Priscilla Sakezles well argues, the quote in the epigraph above is the only thing that comes close to it. It is no self-contradiction.

However, the quote is, we might say, vastly presumptuous. Such presumption was Socrates’ prerogative as a free, male citizen of 5th Century BCE Athens. Socrates finds he knows nothing about what he and those he would converse with would find worthy of mention. He allows that there may be knowledge, but only of those things he deems not “worth speaking of.”

What might these unworthy things be? Things that concerned females, laborers, or slaves -- even those slaves we would today call “highly educated.”[3] (Also, as insinuated by Plato's notion of an "ideal" Republic, many contemporary governors, whom philosophers as "gadflies" were to pester.)

(One wonders, though, how philosopher-kings as “wise” as Socrates imagined they would need to be, could govern in Plato’s ideal Republic since their discourse as rulers would likely be either not worthy of comment or about what they might not "know.")

Things Not Worth Speaking Of? Even today we protect varieties of belief by ignoring the presuppositions that support them. Those are often the “elephants in the room,” or what “any reasonable person would normally take for granted.” Those things may well, though infrequently, be false. Such evasion is often taken to be a “leadership” skill. (See MCEO’s)

Any defense lawyer -- or investigator -- knows and practices interrogation of the assumptions underlying witness testimony. “You say, you saw him assault the victim?” “Were you wearing your glasses?” Were you within reasonable visual range?” “Couldn’t he have just been a bystander?” … etc. (See Identifying Trans-ideological Epistemological Presuppositions)

Such interrogational skills might be taught in “Critical Thinking Education” but for the fact that schooling institutions, despite a long history of giving lip service to the idea, never seem to get around to implementing such instruction. No wonder. Much, if not most, “education” is about thought control, not thought liberation. (See Personal Liberation Through Education)

The Search for Knowledge in the Abstract: a Distraction? A definition, long criticized by Plato himself in the Theaetetus, has it that you know something if a. you believe it; b. you are justified in believing it; and, c. it’s true. The difficulty here is the third condition.

How do you determine if someone who believes something and is justified in believing it has knowledge? You have to find out if what he or she believes is true. But this just pushes it back into a potential infinite regress, since determining that belief is true is a subsidiary belief, which itself must be determined to be true. You have to know that you know that you know that …
(See The Truth Condition (Can it be known?))

Why Do You Think That? This is an important question when trying to judge someone to have knowledge. But who cares? Why even bother with this issue? Isn’t it just a pastime for theorists? No, not merely that. We will see below that it is the locus of the concerns of many people in many different kinds of institution. But first let’s look at the idea of Objectivity commonly thought to be allied with that of Truth.

To be objective is to aspire to knowledge that bears no trace of the knower -- knowledge unmarked by prejudice or skill, fantasy or judgment, wishing or striving. Objectivity is blind sight, seeing without inference, interpretation, or intelligence.-- Daston & Galison, p. 17 [4]

Daston and Gallison in their book Objectivity depict the origination of the concept of objectivity in the mid-19th Century as a development concurrent with the development of new methods and technologies of objects of scientific interest and their duplication and distribution to audiences of persons of similar interests and occupations.

Are the hand drawings of leaves by Carolus Linneaus less “objective” than deguerrotypes of those same kinds of leaves a century later? Are John James Audubon’s paintings of birds less “objective” than the photos anyone might take today with the portable cameras embedded in their IPads? Is every pixel of light captured by such cameras of scientific significance? Often not.

It turns out that what “objectivity” is depends upon not only the scientific (or other) discipline the researcher practices in, but the purposes to which the data collected is being put. Today the time has long been passed when we thought of scientific enterprise as being, generally, a collegial, cooperative undertaking pursued altruistically for the sake of knowledge alone. Strong economic concerns exert heavy influence on the direction and outcome of research, often quite independently of scientific norms.[5]

Academic Tribalism. Becher & Trowler in their book, Academic Tribes & Territories: Intellectual enquiry and the culture of disciplines[6] add support to the anecdotal evidence offered by many who work in colleges, universities and corporate laboratories of an atmosphere of competition and animadversion nowadays encountered there.

In such an environment, income acquisition and disciplinary loyalty easily take priority over scholarship. Academics or scientists of every stripe guard their departmental “turf” as jealously as any competitors of a free-market economy, exacting tribal loyalty, rather than competence, from those acolytes not yet bound fast by dissertation requirements.

Pursuing objectivity does not get us any closer to knowing than does struggling with Plato’s test definition involving justified, true belief. Institutional tribalism tends to make the search otiose. (See Can Criminal or Immoral Behavior Be Dealt With Objectively?)

So What is Knowledge, Ideally? A short characterization is this: knowledge is the useful, most flexible, most unbiased, most communal set of beliefs held across communities who otherwise differ in some important other respects, e.g. basic values, religion, morality.

Knowledge is that honorific title we give to those beliefs we feel meet whatever criteria (authorities?) we are committed to for distinguishing (pronouncing?) what is true from what is false. (Clearly, the "we" is a variable.) 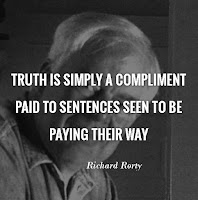 Some religious doctrines fit this characterization. But secular science adds this: whatever is claimed to be knowledge must also be shown to be so through some cross-culturally recognized, testable processes that allow for disconfirmation.

There are two likely consequences of adapting the notion that knowledge is the residue of practical caution, although I suspect that, depending upon one's institutional commitments, it will cause more than a little philosophical disappointment.

The first consequence is that

knowledge as a residue of practical caution needs nothing along the lines of a Socratic idealism to support it. It obviates the complexities of trying to define Truth. Indeed, it obviates the need to pursue "foundations" for anything that is not pertinent to some practical -- in a general sense -- pursuit. (See All Definition Ultimately Rests on Stipulation, i.e. Communal Agreement.)

The second consequence is that

knowledge as a residue of practical caution also comports rather comfortably with Kant's (or Wittgenstein's or other's) epistemological constraints: i.e. given theoretical coherence, we cannot expect to get beyond what our senses and the instruments we construct for their extension can provide for us.

Knowledge: Domination and Evanescence. What some of us in the past -- or our forebears -- considered to be knowledge, we (some of us) dismiss as not involving knowledge, e.g. witchcraft, divine bloodlust, memorization(!). We do not know which of our presently designated items of knowledge will suffer the same fate. Such is the nature of knowing. We need not mourn its “relativity.”

But one confusing aspect of the term, “knowing,” induces such mourning: it is that we use the term knowledge autocratically, i.e. we dominate the beliefs of past peoples (and those who disagree with us in the present) by insisting that the verb “know” be usable in a contrary-to-fact construction. Of past beliefs we say, “If only they had known what we do today, they, too, would have recognized what we now recognize as being knowledge.”

However, we seldom, if ever, say, “If only we could know what people in the year 3000 will know, we could concede that some, maybe all, of what we think we know today is really not so.” A big if for a big concession: if we know something we might, on this consideration, only think we know it!

The Residues of Caution. If we did not have to worry about making a mistake, or of its consequences, we would have no need to be concerned about knowledge. Powerful autocrats may well be able to afford stupidity - at least, in the short run. Or they might well -- as has been long practice -- coerce a consensus on any doctrine that is protected by them from reasonably unrestricted evaluation. (See The Indeterminacy of Consensus: masking ambiguity and vagueness in decision)

It is our taking caution to reduce error (a discrepancy between theory and experience?) that generates the need to know. As we come to think that our cautions have been successful in warding off misfortune, so we accumulate a residue of beliefs for possible future use. This presumed armory against mishap we designate “knowledge.”

But what has happened to the Knowledge we have come, over the years, to know and admire? Is epistemology devolving into an anthropology of communication? Maybe so. Would it make any practical difference, except to further departmentalize the tribes of academia? Or to render obsolete otiose belief?