TERROR IN AMERICA: what the candidates ignore.
By Gary K Clabaugh, Ed.D.


During the fifth GOP presidential debate each of the nine presidential hopefuls assured voters that they would be much tougher on Islamic terror than President Obama. They advocated potentially counter productive things such as creating a database on all Muslim Americans and banning any Muslim from coming into the United States.

Then they made vows to “carpet bomb ISIS into oblivion.” Drop so many bombs it will “make the sand glow in the dark.” Shoot down Russian warplanes should they dare enter a U.S. imposed Syrian no fly zone. And kill Islamic terrorist’s families —toddlers included.

But a funny thing happened on the way to this forum. Every one of these warlike candidates, none of whom ever volunteered for military service, “forgot” that since 9/11, American far right fanatics have committed twice as many domestic terror attacks, as have jihadists. 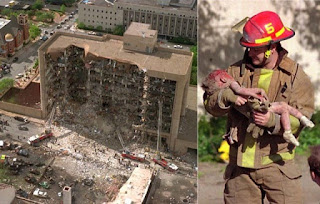 Here are the facts. Since 9/11 there have been 27 acts of terrorism in the U.S., killing 93 Americans. Native-born radical rightists committed eighteen of these attacks that killed 48. Violent jihadist attacks numbered 9, killing 45.[1] Paraphrasing Pogo, we have met the enemy and usually he is us.

Moreover, the U. S. terror risk actually is low when measured on a global scale. The 2015 Global Terrorism Index lists 35 nations, including China, Russia, and the United Kingdom at greater risk. In fact, China and Russia’s risk factors are nearly double ours.[2]

All nine GOP candidates took the opposite tack, creating the impression that a decapitation mad jihadist lurks in every American closet. The tactic is obvious. Scare the crap out of everyone in “the land of the brave,” then pose as the hard-boiled leader that this threat requires. Irresponsible, but it just might work.

Oh, and there is a postscript. During the just completed Democratic presidential debate, just like the Republicans no one acknowledged the domestic terror threat. They too focused on the ISIS and militant Islam menace. Only they weren’t as eager to get further entangled in the Middle-Eastern tar baby.

A worried émigrée from Israel recently asked me if I thought it was acceptable for her daughter’s university professor to consistently take an anti-Israel stance. His class deals with Israeli history and this professor, who is a Jew, consistently depicts Israel negatively. In his very first class, for instance, he unreservedly condemned the creation of Israel, saying it constituted a profound injustice to the resident Arabs.

Despite immigrating to America, this émigrée mom worries that her daughter, born and raised in Israel, will learn to despise the country of her birth. She also wonders if it is proper for any college professor to take sides on controversial issues that remain unresolved.

My initial reaction was to say that a professor’s should not take sides, but provide alternative perspectives and help students consider issues more critically. Upon reflection, though, I concluded that this answer leaves a lot unsaid.

In the first place, most students can, and often do, ignore instruction no matter how forceful or prolonged. I know a woman, for instance, who went through 8 years of Catholic schooling that was conducted by old style nuns who took no prisoners. Yet she is remarkably ignorant of Catholic doctrine.

I asked her, “Given years of religious instruction, how is it possible for you to be so uninformed about Catholic doctrine?” Her answer was, “I tuned them out.” I asked, “Why? She said, “I think it was when they told us it was a sin to save the life of the mother if it required sacrificing her unborn baby. That seemed wrong to me. I remember thinking, what if the mother has other children who love and need her? What of her husband? They also told us babies were born in a state of sin. What an evil thing to say about obvious innocents. That was a real turn off.” I said, “So you simply ignored years of additional instruction?” She replied, “Yep, pretty much.”

This is not a one-off example. It frequently happens that students receiving any kind of instruction do not internalize it. Plus it is common for them to “learn” things just to pass a test. Then they promptly forget it.

In my 46 years as a professor I taught thousands of undergraduates and was repeatedly astonished by how little of their previous instruction they actually remembered. Many found it impossible to convert their raw test scores, say, 29 correct out of 35, to a percentage. Most could not identify the principle combatants in World Wars I, II, the Korean War nor the Vietnam War. Few had any idea when the Great Depression occurred and a fair number of them did not know it even happened. Most could not find China on an outline map. One thought that France was our northern neighbor because, “people speak French up there.” Another thought that Heinrich Himmler must be the chap who invented that life saving maneuver for people who are choking.

These kids were not dolts. They were middle of the pack freshmen and sophomores who, I’m sure, could easily master a complex new social media application in minutes. But many, perhaps most, manifested only transitory (long enough to pass the test) interest in what typically is taught in schools; and trying to transform their purely instrumental interest into an intrinsic one is akin to trying to make a dog happy by wagging his tail for him

I doubt my experience with this academic amnesia is unusual. I’ll wager that student ignorance of past instruction is common in higher education institutions across the country. And that applies to college students too. That’s why higher education senior staffers would rather fight a pack of rabid pit bulls than require their seniors to pass a core subjects test before they can obtain a degree.

How is any of this relevant to our émigré mother’s worries? Well, given the perishable nature of school taught knowledge, it seems highly unlikely that some preachy pedagogue is going to convert her daughter — or anyone else, for that matter. After our proselytizing professor delivers still another impassioned plea for the Palestinian cause you can bet his student’s overriding interest will be, “Is this going to be on the test?” I doubt any will go out looking for a photo of Yasser Arafat to hang on their wall. Of course, students who have positive convictions regarding Israel will be especially resistant to this professor’s preaching.

If a student is on the brink of disliking Israel to begin with, then our partisan professor might prove decisive. But the young lady in question is decidedly pro-Israel. So odds are she will not only reject her professor’s criticisms — including those that are well founded, by the way — but will become even more devoted to her former homeland. Oppositional reactions often occur when deeply held beliefs are challenged.

Is it proper for her professor, or any professor, to conduct class in a one-sided manner? No, not if the issues are multi-faceted. But taking sides does grant a professor the extravagance of self-righteousness. The only problem with that being he or she is setting too great a value on their ego and too little value on their responsibility.

For a more complete discussion of this and related issues, see Is Education Merely Indoctrination?