Gun Fun or Safe Citizens? Must We Make Trade-Offs?

It has been said that democracy is the worst form of government except all the others that have been tried. -- Churchill

For the fanatic with a hammer, every problem is a nail. -- Adage

Fun vs Risk. Like dodgeball, horseshoes, darts, and archery, shooting guns can provide a great deal of enjoyment. But like all of the activities mentioned there is often more than a small element of risk involved in them.

But it is only by learning to carefully balance benefits pursued against costs risked that we develop important skills and moral strengths. We do not live in a Garden of Eden. So it is that guns, whose unskilled handling is particularly risky, still provide us an educational tool for pursuing, maintaining and defending important qualities of life. 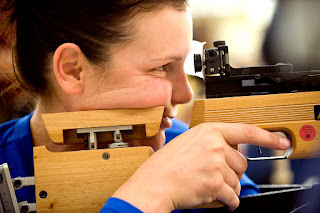 Preference ≠ Morality. Unfortunately, many people tend to mistake their personal preferences for moral principles. This has happened on the many sides of the arguments for gun control. Particularly where kids are involved, the emotional din raised by presumed adversaries tends to drown out any careful examination of the issues involved. Disputants postulate cabals who would threaten our peace and freedom by imposing their own favorite hammer to solve anything that looks like a problem.

So it is that we read of “gun guys” who are sure that anything that looks like a problem can be dealt with a well-placed bullet. Standing up to them are “educators” who sit on their high horses and accept no trade-offs for their fervent belief that it is only more “education,” schooling and higher degrees that will pacify the savage breast. Despite this name-calling and caricature, we can, nonetheless, start somewhere to seek common understanding.

Two Principles for Decision. There are two general principles that, I suspect, would be acceptable to almost all participants in the “debate.” The first is Fair Balance of Benefits and Costs. This principle can be formulated in this way: In proportion to the severity of the costs risked, those who benefit more should assume greater risks.

For example, private gun ownership could be restricted to members of private gun clubs who must buy insurance to pay for damages caused by their members. Clubs would incur liabilities for uninsured damages. This likely high expense would probably make it worth the members’ trouble to screen applicants for membership and to regulate their activities. Maybe in this way the “monsters” who some imagine are the only ones who misuse firearms might be separated out from legitimate users, even if such monsters have already been born into club-member families. (See, for further example, Six things Americans should know about mass shootings)

The second principle is this: Nothing is a means to an end if it’s ineffective to that end. That is, things that don’t or wouldn’t work to achieve a goal, cannot be reasonably argued to be required.

For example, one of the weaker arguments for unrestricted private gun ownership is that it provides a counterforce to government (federal, state, city?) use of armed forces to deny us our Constitutional liberties. A similar nightmare was given expression both in the 1984 film Red Dawn. and its 2012 remake, involving foreign rather than local would-be conquerors. The 1984 teenagers manage to put up a significant resistance with locally cached weapons against Russian invaders and their Cuban and Nicaraguan henchmen. So, clearly, AK-47’s, rocket launchers, even, are needed by us common folk, by us Washington D.C. outsiders, to keep government tyranny in check.

Does anyone read military history anymore? Better yet, has anyone watched the Military Channel lately and seen how Iraq’s Red Guard was shredded and Saddam Hussein’s government toppled by U.S. military might? In two different wars? Which American weekend survivalist warriors -- even if they had access to weapons much more powerful than AK-47’s (and were teenagers) -- could hope to stand up against U.S. special forces, combat drones and spy satellites?

U.S. Armed Services members take an oath to protect the Constitution; not, as in Nazi Germany, to obey the whims of some Supreme Leader. Besides, in a government such as ours with so many competing organizational, political and functional units, it is highly unlikely that any one group could secure the obedience of a sufficient number of weapons-controlling bodies at all governmental levels to bring the Red Dawn nightmare into reality.

Better to organize politically to pursue and maintain what you value, than pretend to prepare for a conflict, for a Spartan military existence, for which few people, even gun enthusiasts, seem inclined to trade away the comforts of job, family and daily life. That Americans are not Spartans is shown by the fact that there is no military draft which might reasonably spread the costs of national defense to those who most benefit from them. However, most people are content to go about their private lives and let the few Spartans among us, together with a large number of newly immigrated, impoverished or adventuresome young people, serve in our own “all professional” military services.

Being effective politically means learning to trade-off cherished habits to foster political stability and functional consensus. Some of these tradeoffs follow (note links):

1. Stop sneering at politicians. It’s a difficult job. No one is a worse person for making compromises.

2. Reduce name-calling: it produces pointless stereotyping and reification. Practice the self-control you preach to your kids.

3. Realize (and act accordingly) that your (or your group’s) special hammer is one among many. Your perception of problems may not be anyone else’s. Negotiate turn-taking. Learn to tolerate and be civil to those people you do not like. Indeed, don’t think you have to like people just because you tolerate them.

5. Don’t expect to settle an issue once and for all. Situations change. Priorities change. People change. Consequently, policies may need to change. Expect negotiation to be a repeated process.

6. Finally, don’t expect even the most enthusiastically celebrated consensus to persist as people come to believe they misunderstood what they were agreeing to; or, how to achieve the agreed-to goal.


Vigilance and political participation are the price of liberty and justice. The lazy, the distracted and the complacent risk losing both of these.

For references and to examine related issues further, visit the hyperlinks given in the text and also see Trading Off "Sacred" Values.