Dependency. History and common experience show this: mutual dependency helps ward off severe conflict. Even though minor struggle is not unusual among people, they shy away from anything more than small-scale quarrels with those they believe they might need. Successful diplomacy begins and ends with smiles.

Even though disagreement may arise, hostility can be constrained by careful avoidance of “contentious questions.” People may propose different courses of action, each proponent vaunting his or her own as the most “effective.” 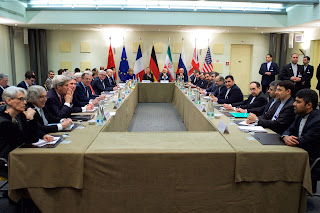 However, avoiding contention runs its own risk: it is that false consensus may develop that hides discord across a broad span of issues. (Just consider the present relations between China and the United States.) Mutually dependent people tend to hide their antagonisms. Smiles mask scowls. But this disinclination to confront one another can get out of hand. An “elephant in the room” can soon multiply into a herd. (See Hiding the “Elephants-in-the-Room” )

For example, during the 19th Century, Britain’s Queen Victoria, the “grandmother of Europe,” hoped to promote international consensus -- among the ruling classes, at least -- by marrying off her children into royal families across Europe. (See What Does Consensus Mean, Anyway?) Ironically, in the 20th Century the combatant countries of World War I, thanks to Victoria, had come to be ruled by individuals related by blood or marriage.

However, the parties to the argument seldom just walk out on each other. They need each other’s help to garner political and general public support to reach their many other more general goals. So, even though they disagree on a particular issue, they maintain their connection by avoiding more basic, and even more contentious questions.

Their disagreements often result from perceived disagreement on moral issues, believed by many, many Americans to be not subject to compromise. We might reluctantly agree with Claud Cockburn’s quote above as to the effectiveness of a cash bribe. Nonetheless we might still question its morality. (Woe the American who must try to do business in a foreign country where bribery is a long-established tradition. It is still a violation of American law.)

Other questions threaten to open even deeper divisions if introduced into broad public venues. Is homosexuality just another life-style? Should women be treated as equals to men? Is marriage only a man-woman relationship? Are Whites a superior race? Should children receive sex education? Should English be the official US language? Should sex be restricted to marriage? Does patriotism require that American history be taught without mentioning social, racial and class antagonisms? Is there only One True Religion? Is Scientific Authority to be accepted? Should forms of discomfort be employed as teaching methods if persuasion doesn’t work?

Effectiveness: more Group Dynamics than Science Unless there is well-established technical information available to be used by evaluators we can trust, effectiveness is generally judged relative to the interests of those evaluators or of their employers. Effectiveness is not infrequently defined by disregarding causes and effects not believed to promote the evaluator’s professional success.

And yet, many firms and institutions are organized so that political, i.e. control and marketing, decisions are isolated from influence by the technical functions supposedly needed to achieve the organization’s goals. Salesmen informally promise customers what engineers cannot -- within budget -- achieve. Marketers kick and scream about “government regulation” that requires them to mention the “counterindications,” i.e. dangers, of their products -- if only in rapidly sotto voce-- accompanied with distractive videos of frolicking people apparently in the best of health.

You’ve Gotta Accentuate the Positive... Just as universities have dropped many entrance and graduate requirements, so have major manufacturers done away with quality controls. They calculate quite rationally that the financial risks of product recall are often small enough to bet that their customers will misperceive dysfunctions as random occurrences. The “Buy Brand Names!” doctrine, so cleverly inculcated via our media, appears to be the only educational goal needed by citizens, .i.e. consumers, in a “free” market economy. (“Fashion mavens” have known about this for centuries.)

The upshot is this: even in apparently technical disputes, effectiveness of a proposed means is judged by focusing on short-term benefits disregarding those costs whose identification would undercut enthusiasm for the proposal. We see this everyday in advertisements for new drugs, or for adult education, health clubs, or chocolate-covered goji berries.

Eliminate the Negative … The other side of the coin is, of course, the Blame Game. The winning trick here in (mis-)judging effectiveness is to strongly characterize those who resist one’s obviously superior, commonsense, legal, moral and non-fattening proposal as not merely “part of the problem,” but as The Problem, Itself.

So it is that “burocrats” not political favorites, “reckless kids,” not faulty equipment, “gluttonous consumers,” not unhealthily confected foods are the reason for the discontents that plague the “righteous, “ who stand in judgment of the miscreants. (See Losing the Series; Blaming the Bat Boys)

Decision-makers in many organizations are routinely buffered from the full consequences of their actions. (See Buffering: Enhancing Moral Hazard in Decision-Making? ) Such “leaders” tend to “solve problems” of production and politics (marketing), by sacrificing organization members often farthest from the arenas of failure to the leaders’ own continued incumbency. (See A Leader's Primary Pursuit: Incumbency)

Socializing Cause and Effect Out in your backyard, you hit a golf ball a little to hard. It bounces off a neighbor’s tree shaking down quite a few leaves, which cover a storm-water drain near his house. Rain and wind arrive shortly after. Your neighbor’s drain backs up. Water flows into his cellar recreation room. Damages are extensive.

Which damages, if any, did you cause? Which are effects of your acts alone? Before you venture to answer questions about your responsibility, notice that a crucial assumptions must be addressed. Is the depiction of events in the previous paragraph a sequence of links in a unitary cause-and-effect chain? Or, are the events somewhat independent, a mere temporally sequenced recounting of possibly many causes and pre-existent conditions?

You can no doubt see that the social and legal consequences for you are likely to be very different how the sequence of the events is described and evaluated.

Let’s extend the scenario. Your neighbor, though unhappy about the damage, does not hold you responsible for it. He knew the drain was already clogged. The following week a stranger entering his property slips on those leaves and breaks both a leg and a cellar window. An alarm goes off. The police come and apprehend the stranger who turns out to be a notorious burglar.

Ought you be commended as a very-effective crime-fighter?


For additional information and to continue this train of thought see, Cause & Effect: essential belief, misapprehension, moral hazard?