Concept as Abstraction. A hindrance in developing intelligence?


I shall not today attempt further to define the kinds of material I understand to be embraced within that shorthand description ["hard-core pornography"], and perhaps I could never succeed in intelligibly doing so. But I know it when I see it, and the motion picture involved in this case is not that. -- United States Supreme Court Justice Potter Stewart, 378 U.S. at 197 (1964)

Why Do We Need Lawyers, Judges, Interpreters ...? Because we often need to reach a workable consensus on what a text-- or statement -- means before taking action. Deliberation and authoritative decision may be needed. Texts, or language in general, can often be vague and ambiguous; and, perceptions can be surprisingly idiosyncratic. (See What Little Babies See That You No Longer Can.. And not only just babies! -- EGR)

Documents alone do not yield definitiveness. Conceptual agreement is the end of many an investigation (consider dissertation advising); agreement is seldom an absolute beginning. (See The Indeterminacy of Consensus ) 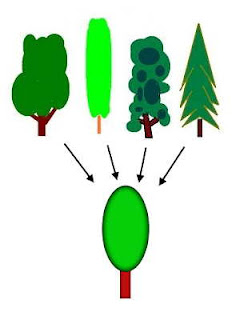 The rhetorical stratagem here is to set up Meno for Socrates' doctrine of the Forms, otherworldly existants that are what knowledge comprises and that we encounter only spiritually. Learning, for Socrates, is explained as our recalling, re-recognizing, Forms previously encountered before birth, say, or in a previous life.

In fact, Meno has rendered a perfectly good definition of virtue; but, in a form that Socrates does not (want to?) recognize because it specifies no common thread.

If we allow that definitions delineate concepts, enabling us to sort out what belongs to a class from what does not, then besides the genera-species definition form (the abstraction) that Socrates is plumping for, a recursive definition works as well.

A Non-abstractive Approach. I used to teach the calculus in a private high school where I was headmaster and would occasionally play a game called "WFF&Proof" with my students. They had to roll a set of six dice that had sides marked with the following: p, q, r, C, A, K, E or N. After a throw they had to see if they could construct a WFF, a well-formed-formula, by arranging the outcomes in various combinations.

Also WFF's were combinations of the letters C, A, K or E followed by two WFF's. Or N followed by a single WFF. So beginning with p, q, or r, one could possibly construct the new WFF's, Np or Nq or Nr. Continuing in this vein, one might construct Apq, or ANpp, or CAqKqrr, ... (Addendum 2, 2/7/16: Note also that no two complex WFF's need have common features, e.g. Cpr and ErArr.)

* We can use Meno's example and define operator V = "is virtuous" to mean merely "has some virtue". And since we are trying to avoid abstraction, i.e. talk about classes, "has some virtue" does not mean "is a member of the class of exemplars of virtue." So now "Virtue" can be defined as "anything that has some virtue." (We thus avoid a question as to whether we have "all" such things under consideration.

Now, if we have to sort out, say, bravery from cowardice, since Bravery is a (Meno-)WFF and Cowardice is not, the concept advanced by Meno does the work of sorting them out. The basic idea here is that if you can, initially, practically sort out contending examples, even of they lack common characteristics, then the label you put on the covering set needn't really matter, depending upon your purposes. (See Does your school really need a kluge-maker"

Another Approach. But isn’t “is virtuous” just as abstract a concept as “Virtue.” It’s difficult to say, but it involves very different procedures for reaching consensus. Trying to agree on what virtue is, in toto, bumps up against philosophical, religious and cultural commitments a lot sooner than merely asking a group to name and evaluate examples, e.g. something I have done for years with graduate students:

Let’s propose a number of situations or actions and then rate each one on a scale from one to five, say,

Then we’ll restrict our attention to 4 and 5 and then see what common threads, if any, they contain.”

(For applications, see A Library of MODEL CASES FOR ANALYSIS)

Of course we will have to examine and justify any proposal X to be a VX, focussing on the particulars of that X rather than doing it top-down from a "higher" abstractional level, straining at heavy philosophical lifting and the likely dissension it occasions.

This is exactly what Ethics Committees in various institutions often have to do in order to achieve even a general agreement. Where concrete problems have to be dealt with, abstract theoretical discussion tends to generate dissensus; practical specificity, more likely, consensus. As in a courtroom, we try first to ascertain not, whether a given law is just, but whether a violation has occurred. (See A. R.Jonsen, & S. Toulmin. The abuse of casuistry: a history of moral reasoning. 1988. Berkeley: U of Cal. Press. Especially pages 16 through 20.)

Abstraction as Sieve. It would probably be unwise to use a coffee filter on a sewage pipe to get potable drinking water. A lot of unwanted things, even excepting most coffee grounds, could likely have passed through, e.g. harmful bacteria and dissolved heavy metals. What the sieve has captured may not give any indication as to what has escaped.

Our organs of perception and internal nervous processors also work as sieves – but inversely from a coffee filter: here we want the “grounds.” We cannot, as dogs can, process the information in light energy that is not within the human visual spectrum. Ditto for the aural spectrum. Nor can we sieve out information from X-rays with any parts of our natural bodies. We need to extend our perceptual apparatus with instrumentation to make up the lack.

If you are listening to a person speak in a language you don’t know, you often can’t even tell which utterances are information-laden and which are random sound. What is even more interesting is that, for languages you do speak well, you can often not keep from overhearing what an individual person in a crowd is saying, even if her voice is somewhat drowned out.

The development of our “sieves” are very much dependent on help from our caregivers to help us strain out what our social environment traditionally recognizes as information-laden or random. The discovery that self-learning neural nets perceive the world in “weird” ways should hardly come as a surprise. Even feral humans, artists, and others who regularly experience synaesthesia or pareidolia are similarly "weird."

For examples and to pursue these issues, see Abstraction.