Jack Spratt could eat no fat; his wife could eat no lean.
And so, betwixt the two of them, they licked the platter clean.
-- Nursery Rhyme 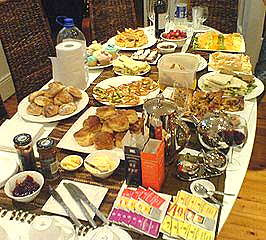 It makes a big difference in cost, preparation, and meal timing whether you serve the same mixed dish to everyone or have each person choose from a selection of offerings. School curriculum tends to vary from stew, for example, 11th grade English or geometry, to smorgasbrod, band, AP Calculus and astronomy.

Except to save time and money, it would not make sense to serve stew, if you knew some people would pick out the carrots; others, the meat; still others, the potatoes and everybody left the string beans. So we might try differentiated instruction (DI), instead.

On the other hand, very many varied foods may not be necessary, since people have tastes in common. In addition a smorgasbrod is likely to generate more garbage, as jalapeno-stuffed olives and raw oysters are passed over. It all depends on the clientele and the biggest constraint is cost.

Differentiated instruction (DI) is an attempt to serve each person his or her own special meal, a controlled smorgasbrod, if you will, based on curriculum theory. If, for example, the curriculum model for the school assumes are 4 ability levels, 7 “cognitive styles,” and 3 levels of subject development, then a teacher in a pure DI classroom would have potentially 4x7x3 = 84 basic models of preparation. Taught simultaneously! For a 45 minute class?!

Know-it-all pundits are always carping that education is not rocket science. No, it is harder, so far as the practice is concerned.

Pure DI is not practical. Kids get lost with only a few variations going on. And then there is the grading. How does a teacher give grades based on even three kinds of differentiation without seeming to parents and kids to be unfair? Because no matter how many times and with what sincerity you intone your mantra, “Equality is not necessarily fairness! Fairness is not necessarily Equality!” you will not convince the kids with the lowest grades – nor their parents. And why sweat the grades? What's the point? College, career, salvation? Will your smorgasbrod get you there?

So, suppose we de-emphasize DI and go back to tracking: put potato eaters together; and, also carrot munchers; and, meat grinders, etc. We say they are in different “tracks,” each with its own shared “curriculum stew.”

But where do these tracks lead? To the same place? Or, perhaps, we don’t know for sure. Then the word “tracking” is something of an illusion; at best, a schoolhouse distinction only vaguely mirrored in the outside world.

Did Steve Jobs study computers in school? Did Warren Buffet study stock investment in school? No and no. Do you know college-graduates working at retail selling? Have you heard of doctors or dentists who have dropped out to become painters or farmers? Probably yes and yes.

So where does all this tracking lead? College, career, salvation? Will your portion of stew get you there?

"The rational incentives to cheat for college students have grown dramatically, even as the strength of character needed to resist those temptations has weakened somewhat,"
--.David Callahan, author of "The Cheating Culture: Why More Americans Are Doing Wrong to Get Ahead" (Harcourt, 2004)

Holy Hypocrites, Batman! Who with any knowledge of history can delude themselves believing that strength of character in this Land of the Free and Home of the Brave has weakened somewhat over the years since our Founding Fathers ….blah, blah, etc.

Strength of character, if it means doing what is morally right at the cost of ignoring what is expedient, has always been rare. The extirpation of Indian nations, slavery and Jim Crow proved that beyond a shadow of a doubt.

I’m not sure what it is in the education of teachers that develops such strong feelings against cheating and plagiarism since:


a. so many of them did it themselves in college*; and
b. they have been for so long blind to bullying, both physical and mental; and
c. they go along with the stupidest “educational innovations” with seldom a peep of protest; and
d. they set up or support the “rational incentives” that present their own students with the choice of either being stupid or being “of low character.”

Justice is rare, especially in schools.


* On the other hand, the low college GPA for education majors may indicate that, compared to the rest of the student body, they are less likely to cheat. Whether this is from fear of being caught, or "strength of character," I don't know.

Policy is not made once and for all; it is made and remade endlessly. Policymaking is a process of successive approximation to some desired objectives in which what is desired itself continues to change under reconsideration.

... A wise policymaker consequently expects that his policies will achieve only part of what he hopes and at the same time will produce unanticipated consequences he would have preferred to avoid. -- Charles E. Lindblom, "The Science of 'Muddling Through'", Public Administration Review, 19, Spring 1959, 79 - 88.

Lindblom's comments are highly pertinent because school reform depends importantly on policy-making, on the goals we set for schools. But goals, themselves, can be reached only when consensus on three basic items stays put long enough to get things to “gel.” Consensus itself is an often short-lived thing, especially in a culture where so many different opinions claim our attention.

In addition, with the advent of superquick communications like Twitter and Facebook, consensus on an issue may be here today and gone tomorrow. (Will the hordes of enthusiasts who chanted “Yes, we can!” in 2008, show up at the polls in November 2010?)

Three “balls” need to be juggled, kept aloft at the same time:

a. expectations – what do (which?) people (think? say?) they want? Is there sufficient consensus on this? Will it last?

b. resources – how much money (whose?) is available to pursue these (which?) expectations and for how long will it be available? Is there a different consensus, on this item also?

c. tasks – what actual productive skills (whose?) have to be exercised and how long will they be available? Is there a different consensus needed here?

Much of American political talk attempts to paper over this difficulty.

Beware of false prophets, which come to you in sheep's clothing, but inwardly they are ravening wolves. -- Matthew 7:15 (KJV)

In my almost half-century in the field of education I can remember more than a few horrible teachers. But I can count on the fingers of one hand the number of administrators, board members and politicians who were also, at some point in their lives, good teachers.

Teachers are almost, in general, a different species from those who settle into the more competitive, avaricious and self-regarding occupations and professions. Not that teachers don’t know how to compete and pursue their own self-interests. I think, however, they are less inclined, unless pushed to the wall, to do so.

In 1972 I served as an assistant strike captain in an AFT action against the School District of Philadelphia. We ringed a school building to block traffic in and out. The teachers – most of them -- hated this. Being directly confrontational was something that went against their grain. What happened in fact was that anyone who wanted to enter could just ask to get by. So long as we thought their action was not “strike-breaking” we let them in. The administrators in our building brought us out coffee and doughnuts – they believed that it was a recalcitrant superintendent and board that provoked the strike.

The teachers even permitted one of their own, a very religious man who claimed that in good conscience he could not disobey civil authority, to enter and leave the building everyday unmolested. He gained this privilege with the promise that any money he earned during the strike would be given to charity.

But the public schools, in general, are run by wheelers and dealers, showpeople and clowns. They don’t care if Jimmy crack corn when it comes to what really nurtures the relationships between kids and adults. It ain’t spendin' the school day preppin' for standardized tests, or firin' teachers reluctant to do it.

Parents know this. This is why in Washington, D.C. they voted against a mayor who supported the efforts of Michelle Rhee to “reform” the schools.

To examine these issues further, see Teacher Accountability And The Pathology Of Domination