America has an appalling history of racism. Yet geneticists assure us that there is only one race — Homo sapiens. Scientifically speaking, distinct races literally do not exist; though racism does, because race is a social, not scientific, conception. Insisting there are races requires cramming people into scientifically spurious categories such as black or white. But cram them we do, often with savage results.**

What is more, “race” is not the only characteristic that can trigger discrimination. Disability, gender, LGBT, and religion are old reliables. Plus you can be too pretty, too smart, too poor, too ugly, too short, too fat, lack “good breeding, and so forth. People are surprisingly resourceful when it comes to excluding and mistreating others.

Affirmative action aids some victims of discrimination — those who have enough political muscle to have their plight recognized by lawmakers. Tactics are then adopted that improve their opportunities. But too often this is accomplished at the expense of others, for example, middle class “white” males, who find they are being treated unfairly in order to make America “fairer”

The nation’s plutocrats are safely above all of this. They can simply price out “undesirables.” And their kids attend exclusive private schools where they need not mix with the great unwashed. Then, as “legacies,” the crème de la crème can even end-run the admissions process at the nation’s most prestigious universities. This particular kind of discrimination, while absurdly unfair, is perfectly legal.

Remember, too, that there are secret societies in these exclusive universities that occupy the very peak of the social pecking order. Yale’s particularly exclusionary Skull and Bones, for instance, offers a lifetime of advantages. Yet there are absolutely no legal strictures on this kind of discrimination.

Now let’s get back to race. In the 1960’s, when African-Americans were demanding their civil rights, an ugly racist “joke” was circulating in the South where I lived at the time. It went like this: “What do you call a good looking, 6”4” black guy with a Ph.D. in nuclear physics?” The meanspirited answer: “A nigra.”

The point of this bigoted “humor” was that no matter what an African-American’s attributes and accomplishments, he or she was nonetheless "inferior" to the most unattractive, ignorant, White person. Race trumped everything.

Which would you rather be:

Now let’s put some of these together. For instance, would you prefer being an ugly, bald, 5”4”, white guy without an inheritance, or a good looking, 6”4” black guy who just inherited $10 million?

Now imagine you are the 5’4” poor white guy and your teenage daughter just failed to get a desperately needed scholarship because it was awarded to the “disadvantaged,” 6’4” wealthy black guy’s daughter. What’s the problem here? That there are a lot of ways to classify people besides “race.”

There is only one race — the human one. But we’re so hung up on black, white, and so forth, that we lose sight of the complex range of human differences and instead institutionalize racism.

Diversity takes many, many forms. So let’s quit cramming people into racial categories and recognize that each and every individual is unique. That is what is wrong with present affirmative action attempts to achieve “diversity:” their abject failure to honor individual differences.

**For a detailed explanation of how this cramming works see Reification: Conjuring Up Spirits

"It is nothing short of a miracle that modern methods of instruction have not yet entirely strangled the holy curiosity of inquiry." Albert Einstein, 13 March 1949, New York (NY) Times.

"Do not trust the horse, Trojans! Whatever it is, I fear the Greeks, even bringing gifts." – Laocoön in Virgil's Aeneid, Book II 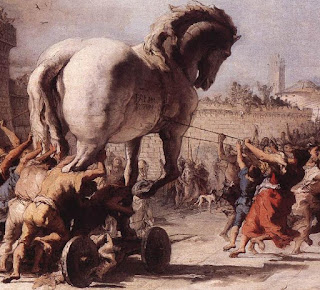 The Raising-Standards Trade-Offs. What is Einstein's point? It is that even though there are criteria used to determine student proficiency in some area – which may well work for someone's intended purposes-- there may be a dysfunction that arises from these very same criteria.

Criteria are comprised from definitions of "adequacy," which when "inappropriately applied" may undermine something that is generally more important in many fields of endeavor: curiosity.

What is Appropriate? For example, a scalpel, no matter how well constructed it is, would likely be a poor choice as a toothpick. This "inappropriate" use contributes to its dysfunction as it cuts through gum and cheek. But "inappropriate" is a vague term: it can cover actions which are unorthodox, or dangerous, or untraditional, or distasteful, or immoral, or improper, or ineffective, or inefficient – among others. Situation, for one, is a major contributor to our judgment as to appropriateness.

But major contributors, too, are the concepts, the definitions of which influence our criteria for judgments of "appropriateness. " Tests of all sorts, for example, "intelligence", are invoked as benchmarks for criteria. But it is a much vaguer notion of "appropriateness" which helps us decide which tests, among others, are the right instruments to support of judgments of adequacy. In general, we have to see how a possible decision situation meets criteria of

b. interest (concern); and

(For more on this, see Rationales for Intervention: From Test to Treatment to Policy)

It's no news that any action has results that can be considered as either positive or negative depending on contexts and interests of the persons making the judgment. But it's important not to confuse a test-error positive, i.e, false positive, with a "true" positive with later costs, i.e. a non-erroneous positive test result, that produces post-test negative consequences. (On what makes a "true positive" "true," see Classification Error in Evaluation Practice)

Contingent Dysfunctionality (CD). You give a friend a shopping list. Your friend comes back with groceries that you had on your list, but you don't recognize many of the brands that you would buy yourself. Later you discover that though many of the items are satisfactory, there are other you find repulsive. Your specs were met, but a lot of undesirables got through. This is an illustration of how contingent dysfunctionality (CD) is brought on by both greater specificity of your list and by the inability of mere conceptual screening, i.e. a lists of concepts (item names), to sift out potentially dysfunctional items for other kinds of situations, i.e. food preparation instead of the original grocery acquisition.

Why CD surprises or disappoints us is that all criteria are situation-dependent functional. It's just that, as we construct our criteria of acceptability, we tend to regard only the situations we want to promote (or have others promote) as of prime importance. We create our own "elephants-in-the-room" by ignoring what we deem "not pertinent to the task."

Any criteria (-- concepts are covering terms for sets of criteria --) may be carried over into new situations for which we have little or no experience in dealing with the variations they may induce in items identified by the criteria. Thus their appropriateness may not be challenged with much more than some misgivings about the "novelty" of their application. (Imagine doing a performance of Hamlet at the beach in a hurricane, wearing swimsuits and knee deep in the tide! Might we not have difficulty judging its quality as a performance even if acted by fine British performers?)

Explicit criteria which attempt to clarify a concept, may also be a flood-gate for CD's that are non-functional for the situations we initially formulated them for. However, in later, relatively similar situations , these criteria may become active enough to concern us. (See Autonomous Car Collides with Bus: an illusion of abstractions?)

The Many Guises of CD. The criteria accepted to specify a concept define what I will call here, for want of a better term, an "elite," relative to a given population of items (thing, actions, persons, etc,) in a given situation, or for a given purpose for given persons. The more stringent the criteria, likely the fewer the items are that accepted into the elite. This reduction of members of an elite is the usual purpose of attempts to "raise standards," or "tighten admissions," or "increase quality."

The thesis of this essay is that by increasing the stringency of criteria with respect to one situation (or group of situations) elites will collect members which are dysfunctional in other situations not in the original. (Literature majors tend to be quite dysfunctional in mathematics.) These contingent dysfunctions are not necessarily intentional, but often are either disregarded, overlooked or dismissed as being of low probability, or of negligible long-term cost.


a. A college football coach "beefs up his line" with students who turn out to be academically inept. Their grade-point average may disqualify them from playing.

b. Farmers breed cattle for reduced fat content which turn out to be less resistant to common diseases.

c. Traditional monarchies accept as "royal consorts" persons with royal family histories, disregarding their genetic hemophilia. The consorts themselves turn out to be hemophiliac. Their illness may impair their ability to govern.

d. Car companies develop automobiles which are "self-driving" but which turn out to be unable to recognize and handle a range of low-frequency emergency situations easily recognized, if not well-handled, by humans. Issues of risk and responsibility may arise.

e. From the perspective of the people of ancient Troy, the Wooden Horse -- now referred to as "The Trojan Horse" -- which they accepted as the gift of defeated Greeks honoring the Goddess Athena, led to Troy's destruction.

The Trojan Horse is an exemplar of most, if not all, scams and illusions. What is important here, in considering its status as an example of CD, contingent dysfunctionality, is understanding for whom the horse is contingently dysfunctional. Clearly, it is a CD for the Trojans, not the Greeks. The Trojans misinterpreted – actually, accepted the explanation given them by the apparently left behind Greek, Sinon -- and despite the warning of other Trojans, took it to be a religious statue; and, not a special-forces invasion ploy.

Perhaps, if instead of letting the statue stand untouched overnight as they celebrated their seeming victory over the Greeks, the Trojans had set it afire, the relative CD-status described in the previous paragraph would have been otherwise.

For examples and to pursue these issues, see Evaluating Learner Strengths and Weaknesses:  the Impediments of Formalism )