Math Wars? A Tempest in a Teapot? Or a Serious Struggle? 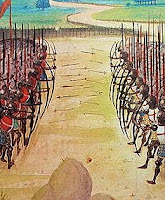 As an ex-math teacher (Jr. High and High School, basics through algebra and the calculus) I can only look at the jousting between enthusiasts of different pedagogical approaches to mathematics with wonderment. My experience has been that no matter how people learned math in school, most reach adulthood knowing little mathematics and liking it even less. (See John Paulos’ Innumeracy for extended discussion of this point.)

Debra J. Saunders in the April 9, 2009 edition of the San Francisco Chronicle reports on a conflict in Palo Alto between proponents of, what they call, “solid math” and those who appear to be “unified-theory” advocates, who, among other things, reject teaching alternative algorithms for arithmetical processes.

This debate has been around for a long time: I, myself, participated in the “revolution” of the New Math back in the seventies where it was very apparent that enthusiasm for the New Math varied directly as the distance from the enthusiast and ordinary school kids.

Can this “war” be decisively won? And even if it is “won”, will more people turn out being competent in some kind of mathematics?

To examine these issues further, see The "Math Wars"  A Short Analysis of the Controversy