...once (AI) becomes very large, and it has thousands of units per layer and maybe hundreds of layers, then it becomes quite un-understandable. - T Jaakkola, MIT [2]

AI is useless until it learns how to explain itself. -- L James Towards Data Science[2]

"It is by universal misunderstanding that all agree." -- Baudelaire [3]

"Playing" with Deception. Many of the games adults play with even very young children work at getting them to recognize that sometimes what they see, hear, feel or remember can be misleading. Even one-year olds can be introduced to "peek-a-boo" in which they learn that the immediate disappearance brought about by covering one's eyes does not, by itself, make what they have just seen, go away.

Two-year olds can be surprised and entertained with a game called, "I caught your nose," where the adult or older, less naive child, uses curled forefinger and middle finger of one hand to gently clasp the younger's nose, moves the hand away while sliding the thumb in between the two fingers and says "I caught your nose."

I have seen such games played hundreds of times. The naive child's initial reaction is usually one of surprise -- although sometimes one of dismay or even shock -- but, as the "nose-holding" hand opens up empty and the adult says, "feel you face" the child, relieved, will smile or even laugh and invite: "Do it again."

But playing with deception most likely only works under two (among many possible other) conditions. These are that

1. the children are more or less "normal," i.e. healthy, awake, and undistracted by such things as a wet diaper or hunger and

2. the experiences of the learners bring them to develop a sense of probability concerning what they perceive in contrast to other options that might occur.

If, for example, a person playing peek-a-boo hides or, say, dons a mask, while the child is covering its eyes, the experience will likely not teach much about what is likely to happen under which circumstances. Nor will it happen if the child is developmentally too under- or overdeveloped to benefit from the interaction.[4]

Deception games in educational contexts are usually a kind of training in "normality," e.g. merely covering the eyes does not change what's "really there." Or, if something's where it should be, say, you nose on your face, then it can't also be somewhere else. This is training in what we call "common sense."

However, a sense of "normality" is different from "common sense." As children grow, they might get training in a more sophisticated, less "common," form of "common sense." For older children we might use a poem such as

One or more students hurry to do the arithmetic and come up with 2401. We "correct" them by saying that the answer is "one", because I, alone, was going to St. Ives. The teaching point is usually to get them to read more carefully.

But a more insightful student might point out that the poem does not originally indicate, "I alone was going to St. Ives." It's possible, therefore, had I already had (unmentioned) co-travelers, that at least 2402 were going to St. Ives. The original teaching point -- Read Carefully! -- fails, but is (hopefully) compensated for by the discussion of the possible assumptions and what they let us infer.

Even relatively sophisticated adults can be fooled by clever illusionists who appear to make coins disappear and, then, pull them from a spectator's ear. Trained scientists have been known to insist that they have seen individuals bend spoons without touching them. Illusionist's confederates are "seen" to get cut in half and survive the sawblade's mutilation. And elephants can disappear in a puff of smoke!

In such circumstance, however, the victims of the illusion either

1. are not able to carefully examine the surroundings of the events, for e.g. being seated in an audience; or,

2. are generally ignorant of techniques of illusion, e.g. coin-palming, or attention-distraction,

which, though employed in their present circumstances, are rare in day-to-day experience.

Of greater concern to us, perhaps, should be the abundant presence of illusionists of political and commercial enterprise armed with well-established research on psychological biases and manipulation techniques. Educational institutions have yet to catch up with, much less keep abreast of, these clever people.

Both schooling and experience, in general, work toward refining "common sense" even to the point of supplanting it with something else. But a socially important, very problematic conception of these processes is the common myth that some substantial residues of the original "common sense" remain as a substrate, so to speak, of newer learnings. The myth holds it that the residues remain not merely as individual inclinations and skills, but as widely shared, if only latent, tools all can rely on.[5]

Consider the following conversation between an employer (E) and a prospective job-holder (P):

P: But E, as a Y manager, I haven't had any experience really working with X!"

E: Yeah; but, you've been successful with Y. And your heart's in the right place. I feel we'll get along just fine. So when it comes to working with X, just rely on your common sense!"[6] 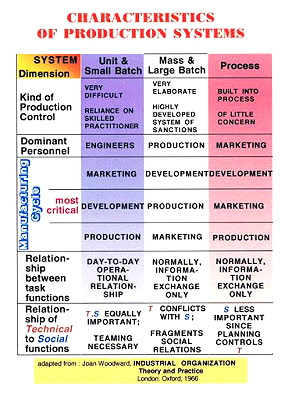 Whether or not we find such a conversation problematic might well depend on the kind of organization E and P will be involved in. If it is, say, a small but expanding family-owned-and-run retail operation, that is one thing. However, if it is a middle-sized medical-surgical establishment, or a large kitchen-facilities factory, other concerns arise.

As Joan Woodward [8] has long argued, there are important and complex relations between organizational structure, staff social relations, and productivity.[9]

What is Common? What Makes Sense? A typical definition of common sense from The Cambridge English Dictionary gives us:[10]


The basic level of practical knowledge and judgment that we all need to help us live in a reasonable and safe way.
Examples: Windsurfing is perfectly safe as long as you have/use some common sense.

Note how many terms presume anterior "definition": basic level, practical, knowledge, judgment, reasonable, perfectly, safe. But what level is "basic?" What kind of information is "knowledge?" Who does "we all?" refer to? What is "reasonable;" what is "safe?"

Our natural languages use terms that are often vague and ambiguous, highly dependent on situation. Many of our linguistic choices are based on our belief that others can understand and trust us even though we vacillate in choice of words -- not meaning "literally" what we say -- to color our speech with our own values, moods and intentions.[11] We make them functionally precise ("clear" enough) by adjusting them, ad hoc, to the contexts we use them in and in relying (perhaps, wrongly) on our assumptions of normality.

Consider the following example of an all-too typical conversation,

Harry: Snow again! It's May! I've lived here all my life and never before seen so much snow!
Jack: Uh-huh. It shows how global warming is just a fraud!"
Harry: What makes you think so?"
Jack: It's obvious to anyone who has any common sense." More snow, less warmth!

A critical claim here is "More snow, less warmth!" This is common sense to millions of people, in the U.S. at least. We may say they are mistaken, but the falsity of their premise does not necessarily affect the logic of their argument. The argument may be based on a "confusion" between the notions of "climate," a characterization of weather events over extended periods of time and with large areas of occurrence; and, "weather," states of the atmosphere, e.g. phenomena of temperature change, precipitation, etc. considered from restricted perspectives which are more likely to be experienced by individuals or smaller populations. Breadth of perspective is independent, one would think, of commonality.

When was the last time a poll was taken to ascertain which individuals living under which conditions share common agreement on the assumptions underlying the definitions of the Cambridge English Dictionary? [12]

Depending upon where they are located and how informed they are, they may well be exercising their "common sense" even though it brings them to false conclusions. Recall only how phlogiston once provided a scientifically acceptable theory of combustion. Recall, also, that despite the efforts of Lister and Pasteur, many educated people rejected bacterial action as a cause of infection.

Every linguistic transaction is a wager which may not gain "high predictive probability" by being written down in "black and white" or entered as code into a computer program. Just as arguments can be valid without being sound, so can valid arguments yield falsehoods though they rest on common sense.

To continue with similar considerations, go to The Indeterminacy of Consensus: masking ambiguity and vagueness in decision.

[2] Knight, W (MIT Technology Review, 4/11/18) The Dark Secret at the Heart of AI
See also James, L Towards Data Science (2018) AI is useless until it learns how to explain itself.

[4]"Developmentally appropriate" is one of those educational concepts that is both theoretically dense and vague as well as hard to specify a non-circular definition for. See Redden & Frederick below.[7]