Speak English or Else! Keeping the dice loaded. 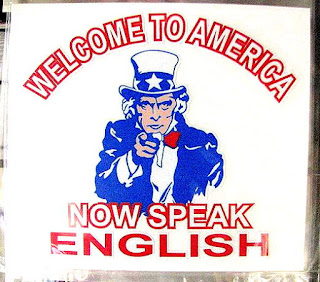 You may be a doctor with a fine degree
But If you can’t speak English
Just like me,
You’re nobody I need to see.

--- Adapted from "What a Wonderful World"
by H Alpert, L Adler, S Cooke

There is substantial reluctance, active resistance, even, to permitting any language other than English (in any of its North American variations) to be recognized as an official language of the United States of America. Why might that be?

Part of it is the persistence of generally submerged ethnic, class and cultural competition for status. But there are more substantial issues to be recognized: native speakers of an American English dialect have a huge, unearned social and business advantage over those who come to it later in life. Many do not want to give up that advantage.

You may have gone through school learning little, yet you will still have a communication skill, a tone of voice, an enunciation, merely, learned as a child, that gives you an edge in the US over the most educated person who learned English as a second language. To a similarly hap-hazardly-educated American ear, you will sound "natural." (Exceptions to this prejudice, especially on the East Coast of the US or in Hollywood, is anything that passes for "British" English.)

No wonder you shrink from recognizing another language besides American English as official: you might lose an undeserved, purely fortuitous, competitive edge in many arenas of American life.

To continue these considerations, see Cultural Domination and the Teaching of ESOL, English to Speakers of Other Languages.