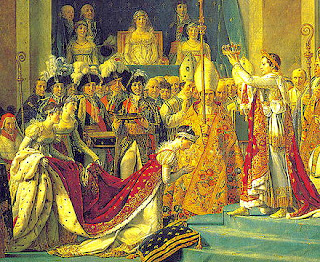 Heaven and Earth will disappear,
But our Dear Followership will continue forever.
--- adaptation from Himmel und Erden werden vergehen

Rule #1: Organizations strive for Immortality. Example: Rome’s highly paid and indulged Praetorian Guard, formed in 27 BCE to provide protection for a relatively few individuals, e.g. Augustus Caesar, his retinue and family, eventually came to the point of choosing and disposing of emperors. It lasted until the 4th century when it was dissolved by Constantine.

However, in our reality of rocks and humans and clouds, organizations are not the kinds of entitites that can be said, literally, to strive. They are, in law, merely fictional individuals. It is their their leaders, members and supporters who are the real, flesh and blood, coveting, striving, needful and prideful persons.

Rule #2: Membership involves "sunk" costs, e.g. time, opportunity, prerequisite expenditures, e.g. education or licensing, etc. These may not be costs one can recoup if the organization goes out of existence. Also, because organization members tend to admire and aspire to rank more than accomplishment, members don’t plan for their own occupational demise once the original purpose of the organization is accomplished or no longer viable. There are no "sunset laws" to be obeyed. This is particularly true of those whose basic needs are most dependent on the organizations' continuance. So it was that the Praetorian Guards did not say on August 19, AD 14, “Too bad. Augustus has died. Let’s hike out to the boonies and go back to being regular, underpaid and overdisciplined soldiers.”

Many leaders, particularly, tend to pursue permanent incumbency, having long developed a taste, an addiction, even, to the substantial and psychological rewards of leadership. What the organization was set up to produce, becomes less and less important as leaders participate less and less, operationally, and serve mostly political purposes -- the most important being organizational continuity.

So it is we have corporate-form organizations that outlast their members in the form of churches, industries, armed forces, universities and unions. Along with such corporate organizations we have, over a span of time, successions of so-called “leaders,” less expected to be producers than figureheads, whose often dispensible prerogatives of office are paid for at the cost of those who are compelled to support them.

The upshot of all this is this: it may not matter in the long run what kind of regime installs itself, or what kind government the people elect. It could be communist or fascist, authoritarian or democratic, liberal or conservative, religious or secular. In the long run, unless externally constrained, organizational politics will play themselves out and incumbent dynamics have more to do with who governs and how, than whatever political philosophy is given lip-service to. Only the governed will suffer.


For references and to examine these issues further, see LEADERSHIP AS USURPATION?: the Grand Inquisitor Syndrome and Morality in Rank-Based Organizations