Hiding the “Elephant in the Room”: avoiding consideration of competing options

Only in the frictionless vacuum of a nonexistent abstract world can movement or change occur without the abrasive friction of conflict. -- Saul Alinsky 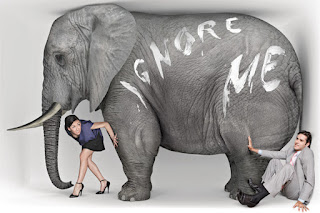 People in most undertakings have encountered such beasts, and not infrequently, for example:


a. you often can’t gain speed for a vehicle and cut fuel costs at the same time;
b. you can’t achieve both great muscle strength and running speed; and
c. on a fixed budget, you can’t accumulate savings and also spend profligately.

However, MCEO’s tend to be the “invisible bugs” in educational or other social programs. Particularly in situations where there is a delicate political balance needed to maintain organizational stability, MCEO’s tend to be the “elephants in the room” that are deliberately disregarded, discussion of which participants are dissuaded from pursuing -- “We don’t go there,” is the warning given.

Is your political candidate’s opponent a womanizer? If your own is, also, “you don’t go there” -- in public at least. Less newsworthy, of course, is the conflict between the objectives of having all kids achieve a high school diploma and college entrance; or between graduating college and finding high quality employment, or, even, providing adequate medical care without reducing those who provide or need it to poverty.

Some MCEO combinations seem unavoidable: e.g. every birth predicts a future death; every option exercised means others are foregone. But perhaps many MCEO’s can be softened by innovative procedures that avoid ultimate mutual cost generation. That hope has long sprung eternal even in the face of hard experience.

Any two feasible options may compete, if circumstances force it: for example, if they are funded from the same budget. Or, if the different options are championed by different power-holders within the organization. In general, MCEO’s are no more than special cases of competing options. But "special" because "banned," as it were, from public discussion.

For some issues on MCEO's in historical educational context, see Clabaugh & Rozycki (1986) School Reform via Teacher Professionalization: Is it Cost-effective?”