Searching for “Reality"? Stipulate A Turtle! 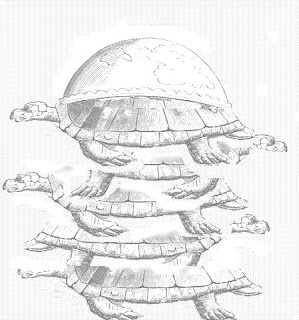 
"What you have told us is rubbish. The world is really a flat plate supported on the back of a giant tortoise." The scientist gave a superior smile before replying, "What is the tortoise standing on?" "You're very clever, young man, very clever," said the old lady. "But it's turtles all the way down!"
— Hawking, 1988 A Brief History of Time

Traditions of Stipulation Define Disciplines. We find in West’s Encyclopedia of Law[**] the following characterization of stipulation as it is used in legal proceedings:

An agreement between attorneys that concerns business before a court and is designed to simplify or shorten litigation and save costs. During the course of a civil lawsuit, criminal proceeding, or any other type of litigation, the opposing attorneys may come to an agreement, foregoing further investigation, about certain "facts" and "issues". Such an agreement is called a stipulation.

From this conception of stipulation it is easy to construct parallels for almost any kind of research that does not or cannot push to some ultimate, incorrigible result. Within a discipline practitioners tend to pursue answers to questions arguably recognized as within the scope of their discipline, using methods arguably related to traditional methodologies. One cannot proceed within a discipline without some potential for recognition from others in that discipline that their undertaking is appropriate. Every graduate student learns early on how narrowly one must frame a research question for it to be acceptable to an advisor. (See Becher, T. Academic Tribes & Territories: the Cultures of the Disciplines. 1989.) See All Definition Ultimately Rests on Stipulation, i.e. Communal Agreement.

Of course, one can strike out on one’s own pursuing “gigantic truths” and risk possible self-delusion, uncompensated-for bias,and dismissal, should one's efforts, in the long run, not stand up to criticism from interested parties. Many famous discoverers have run this gauntlet and met with success, if only posthumously. (Many more of us console ourselves with advice from an ancient and also unremembered author: Pan metron ariston.)

But even well-established contexts of research have their own problems. Coordinated group activities, in general, are subject to tensions among authority, consensus and efficiency. Research problems frequently raise issues as to who decides procedures and goals, how much agreement among participants has to be obtained on these issues to come to a decision; and, how best to use the resources available for it.

The sticking point is this: such decision-types, i.e. those arbitrating authority, consensus and efficiency, may reiterate themselves for every decision consequently reached. This reiteration is often dismissed by invoking some tradition of stipulation contexts, e.g. budget limits, time and opportunity costs, political opposition from funding sources, diminishing returns on output, even researcher fatigue or boredom. (See The Fractalization of Social Enterprise)

Just as lawyers on opposing sides may stipulate evidence they have no hope of subverting, so do researchers in any field forego spending time and effort on pursuits that consume scarce resources with little promise of compensatory yield.

But What About Objectivity? Wouldn’t stipulation make it impossible?

In the early 1970’s I met a researcher whose speciality was disease etiology. Her interest was aroused by an apparent correlation between increased density of cancer cases and density of chemical manufacturers in certain neighborhoods of a large Eastern city. She obtained federal funding and began her investigations by interviewing people in those neighborhoods.

Two weeks into her interview schedule, she received a phone call at 3:00 A.M. The caller warned her not to continue the interviews; not even to come back in to the neighborhood. Otherwise, she would “end up with two broken legs.”

Being of a somewhat crusading spirit, she considered continuing with her research despite the phone call. Her husband, however, was not comfortable with her ignoring the threat. Little matter: one day later, while she was still weighing a decision, she received a phone call — this time at an appropriate hour — telling her that the funding for her research had been cancelled. No explanation was given.

No doubt from the research perspective of trying to see if there was a relationship between cancer victims and numbers of chemical plants, a set of conditions had been stipulated which impaired the objectivity of her research. The research was terminated before the experimenter’s intended procedures had been carried out. Lacking more information, we can speculate as to what the research-termination procedure was stipulated to be, although we do not know who had the power or authority to do it.

Objectivity depends on what the proposed object is. If all you want to do is stare through a tube to see pretty patterns, then a kaleidoscope will do as well as a telescope. Every procedure, or instrument employed in a procedure, can be questioned to what extent it creates as well as gathers “data.” Reliable instruments, stipulated as such, may permit reasonable stipulated outcomes, e.g. abridgments of otherwise lengthy procedures. (See Can Criminal or Immoral Behavior Be Dealt With Objectively?)

For references and to examine these issues further, see Knowledge: The Residues of Practical Caution