If you want something done, ask a busy person. -- Benjamin Franklin, Pearls of Wisdom

It was a staff development day in the junior high school where I worked in 1974 as a teacher of ESOL and coordinator of the ESOL program. I was asked to be leader for a mixed group of experienced and newly-hired teachers. The topic was “Designing a School.” A few minutes after our session began, I was called by my principal to be a translator to help deal with a dispute between the families of two students. I gave my group the following “assignment” to be done while I was away:

You are going to design a school for 500 pupils, ages 12 - 14. Your budget will be guaranteed at $5000 per student. There are no other restrictions. Use your imagination. Be inventive. (I should be back in 40 minutes.)

When I came back, I asked my colleagues what they had come up with so far. One replied, “It started off well, but we soon got involved in an argument over priorities.” I asked what the dispute was about. Another person piped up, “We couldn’t agree whether we needed more vice-principals or more counselors. It would be too expensive to hire as many as we all wanted for both occupations.”

I asked, “Did you consider at all why you would need either vice-principals or counselors? What was the school going to be about, so far as learning activities were concerned? The answer came back, “We didn’t get to that, because we wanted to get the humdrum necessities out of the way before we considered the more interesting stuff.” Apparently neither Experience nor Recent Mintage guarantees Wisdom or Inventiveness.

Assuming my group didn’t just run out, while I was away, for coffee and donuts, what seemed to be blocking their inventiveness was an all-too-common confusion between roles, which are defined by the type of organizations one belongs to, and functions, which are determined by the kinds of interactional environments one happens to be in.

The difference is clear and very important. Schools traditionally designate roles, i.e. which people are teachers and which are pupils. To each group, according to institutional practice, are reserved certain prerogatives, e.g. teachers have the authority to give pupils assignments; pupils are expected to do them. But surely neither group always functions within the role: teachers can be taught by their pupils as when, for example, the pupil give a presentation on a topic with which the teacher is little acquainted.

Institutionally, many schools have a specialist role, Curriculum Developer, to which is designated the function of creating materials for classroom use. But any competent teacher performs that function persistently as they adapt distantly prescribed documents to the realities of the everyday classroom and to flesh-and-blood pupils.[1] 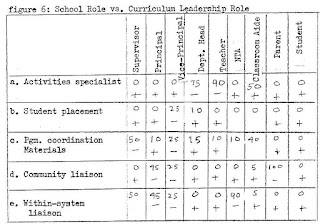 In many schools, roles are revolving positions. Personnel are sometimes teachers, other times administrators, and often share functions among their difference roles as when teachers act as disciplinarians, or counselors, and vice-principals as substitute teachers.

Roles develop as schools become institutionalized to meet legal or communal expectations. When a new school starts up, invariably most personnel serve different and changing functions while the scope of their interactions develops. With stability -- read here, “assured funding, etc.” -- personnel become, like insects in amber, frozen into their roles. This is not a bad thing from the point of view of the pupils, who, especially when young, need emotionally the kind of constancy of role, and the consistency of function, that institutions provide. (See Controlling the School: Institutionalization)

Would-be reformers who imagine that ephemeral groups are invariably better educational environments might well consider the corporate world. Whose stocks retain and gain value with the passage of time?

On the other hand, if the world changes significantly, institutionalized organizations risk ossification. And the roles, the careers, of those persons within them, often obtained through long and painstaking preparation, decrepitate. Eventually, the institutional roles may disappear, even though the interactional functions remain.

For references and to examine these issues further, see Do Schools Really Need Curriculum Supervisors?  Confusing Role with Function


[1]See also On The Viability Of A Curriculum Leadership Role: Avoiding Confusion of Role and Function