All Schools Are Little Wheels: the J. Fred Muggs Effect 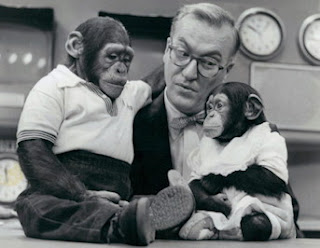 Many of us were shocked, -- shocked, I tell you, -- to read (more likely, see on TV) that chimpanzees, affectionately known as "chimps," were not just the cute buffoons we had been seeing all our lives in the media. In the wild, they warred against other clans of their own kind and hunted and fed on the fresh kill of Bonobo monkeys; you know, those even smaller, cuter, gentler primates whose main pastimes merely mimicked those of a typical college undergraduate population. (See also 7 Adorable Animals That Could Kill You In An Instant.)

Faith in the docility, the sociability, of “pets” has brought it about that Florida is overrun by snakes of foreign origin. You flush ‘em down the toilet down there and they end up in the Everglades. (In the North, it’s alligators; elsewhere, it’s boars and cats.)

Americans make a big deal about the distinction between religious and public schools. But both rest on some kind of Faith. The great myth is that the public schools – accused dim-wittedly of being “secularist” – put their faith in Science. Not so.

A group of psychological researchers have reviewed the literature and determined that the following beliefs – often fanatically held by many public school personnel and university trainers of teachers-- are false or lack verification:


--There are left-brained and right-brained people
--Intelligence tests are biased against certain groups of people
--Students have learning styles. Teachers can teach to them.
--Heritable traits cannot be changed.
--Low self-esteem causes psychological problems.

How much so-called education, not to mention educational reform, is carried on assuming that these either downright false or unproven ideas are true? How many so-called Best Practices are based on these myths? Perhaps reform doesn’t take in schools because too many people would rather hold on to their chimps – pardon me, “faith” -- than be effective educators.