"Excellence in All Things!" A friend was hired as the headmaster of a small (70 students, grades 9 - 12) private school, the dominant if not sole admissions criteria of which was the parents' ready ability to pay the tuition. This school touted its ability to transform reluctant or lackadaisical children into "Ivy League" students. In fact, scholastic achievement, as one might soberly expect, was rather variable.

At a school board meeting, several of the governing members proposed that the headmaster post and preach the slogan, "Excellence in All Things!" The headmaster suggested that such action would only provoke derision from their rather sophisticated teenagers and likely, also, a certain disdain for the competence of the staff. He, the headmaster, would personally be happy if each student could show better than mediocre accomplishment in a few areas of endeavor.

A particularly vociferous board member remonstrated that it was the headmaster's and teachers' duty to educate all the students to adopt the slogan and strive to actualize it. But another asked, "Which subjects should be favored if it turns out that time or other resources run short?" Thus began what turned out to be neither a very long nor very comfortable "discussion" among those present at the meeting.

Creating More Hamster Wheels. Many of us can look back over many, many years to see the sacrifice of the adequate, the good, even, to the pursuit of the excellent. Yet we seldom see memories of such pursuits raise much apprehension of yet another treadmill exercise. Is our communal memory so weak, our resources so plentiful or our embarrassments so forgettable? What accounts for this Sysiphean proclivity (in almost every area of organizational life)? 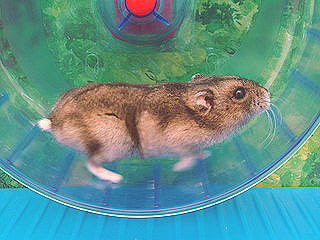 One kind of explanation for cavalier attitudes toward excellence comes readily to mind: disregard of how ideas of "excellence" vary even within the markets pursuing it.

Broadly characterized, a market is a (theorized) group of people looking to acquire what they perceive to be a benefit, some thing or state of affairs perceived to be of positive value. These market members pursue an exchange via some medium, be it money, labor, time, attention, material items, or the like.

These and related notions are quite run-of-the-mill. However, here we mean to include in our considerations "externalities," beneficial or damaging effects affecting persons or organizations which are not themselves involved in the markets creating those effects. The motivations of school directors and staff, paying parents and the students involved may be -- indeed, usually are -- somewhat different, despite school slogans proclaiming, say, "Our school community works together in pursuit of excellence!" (See SLOGANS: junkfood, dead-weight or poison?.)

Weak Markets Markets can be weakened by attrition or disorganization. If groups that are willing to bear the costs of pursuing "excellence" are lacking, of insufficient size or disorganized, "excellence" remains little more than a vacuous shibboleth. This is often seen with the promises so easily bandied about in our political campaigns: hopes for benefits are much more easily raised than are the sacrifices, e.g. taxes, to pay for them.

Sometimes a purported benefit is perceived to "cost" too much. Just as the initial costs and future upkeep may "price" a car "out of the market;" so, also, might the burdens of a social relationship with some persons, "high-maintenance" individuals, leave them unbefriended.


It is by universal misunderstanding that all agree. — Baudelaire

Though many people will agree on the face of it that "excellence" is better than "mediocrity," lack of agreement as to what the term, "excellence," delineates may cause an actual market to dissipate.

A potential market may not coalesce because of disputes about which criteria exactly should be used to describe the hoped-for benefit. This is a general problem in every area of life with vaguely described benefits, such as security, responsibility, ownership; and, not least, achievement, education and excellence.

Consensus is often only apparent. Sloganistic terminology abounds. Practical criteria are either missing, or lost in controversy. Leaders of long established institutions, family, schools, churches and governmental entities, may not to be able to find common criteria of excellence that serve each of their particular institutional interests. (See Engaging Conflict: a Leadership Necessity?)

So, the pursuit of "excellence" and the quarreling about its "true" meaning are not the high-minded undertakings as they often made out to be. They're just fancy forms of rivalry; nonetheless, culture-clashes.

But,... better rivalry than warfare.