The limits of your language are the limits of your world. -- Wittgenstein
Dimensions of Conceptual Definition: emotive, descriptive and communal. There are three often overlooked dimensions of importance to be considered when attempting to define a concept used by humans. They are

A: The Emotive-Evaluative Dimension. This focusses on expression of feeling or evaluation, or lack of such. e.g. creepy, cute, three pounds, light, 6 feet. These terms range from expressive to dispassionate with either positive (celebratory) or negative (deprecatory) connotation.(For more on celebratory/deprecatory comparisons, see Philosophy, Race and Language 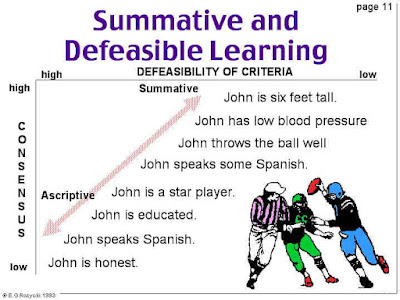 B. The Descriptive-Uncertainty Dimension. This focusses on the extent to which judgment is based on presumption as opposed to demonstration, e.g. honest. happy, graduate, felon, equilateral, topology. These terms range from defeasible (also characterized as presumptive, ascriptive or concessive) to summative (invoking the logical sufficiency of necessary conditions).

C. The Personal-Communal. This dimension focuses on the breadth of community invoked (not necessarily actual) by the judgment. e.g. cute, annoying, criminal. These terms range from idiosyncratic to social.

It is important to note that these dimensions are not merely embellishments on the distinction in common parlance between “subjective” and “objective.” Daston and Galison in their book, Objectivity, present much evidence that this distinction has been historically problematic, particularly in the sciences. (For more on “objectivity,” see comments and references at Can Criminal or Immoral Behavior Be Dealt With Objectively?)

Unexamined, a vague concept of objectivity probably best serves the interests of those engaged in the academic, professional or commercial competition for status or markets. For more on such considerations, see Tony Becher(2001) Academic Tribes and Territories: Intellectual Enquiry and the Cultures of Discipline.)

Note well that a disagreement among humans on how to describe something need not require a difference in sensory perceptions among them. A group of people could disagree, and often do, on whether a tarantula is creepy or cute, even though they all agree that it is black and hairy.

Those who find it creepy might disagree with those who think it cute on the conditions under which the tarantula would be also dangerous. Very individual fears (or indifferences) may not be shared among members of the same community. This is common experience.

Descriptive uncertainty, on the other hand, is often overlooked or assumed to indicate a (possibly mistaken) perceptual difference underlying a disagreement. What is ignored is the judgment of uncertainty that may be quite independent of agreed-on perceived characteristics.

For some problematic examples consider the uncertainty involved in deciding that:

1. John, a convicted embezzler just released from prison, can be treated as an honest man;

2. John having memorized X number (3 or 3000?) of Spanish phrases can speak Spanish;

3. John, having acquired some number of certificates and diplomas, is educated; and

4. John, playing above average basketball in his first season, is a star player.

Each of these claims, 1 through 4, is far more vulnerable to rejection (defeasible), and would require far more consensus on evidence than the following:

Isn’t this just obvious, just old hat? Apparently not. In the frantic pursuit of the imagined treasures of creating robotic homunculi, defeasible concepts of mental capacity are reduced to a fool’s gold list of sensory inputs hoped to produce sufficient conditions for characteristics of human intelligence. The three dimensions discussed above are ignored as “unscientific,” e.g. too “sociological” or “philosophical” or “legalistic,” by researchers whose conceptual hammers have been tempered in the hard sciences.

So, for example, traditional myths about teaching and learning abound among some researchers in artificial intelligence – also among researchers in other fields, e.g. psychology, organizational studies, and education. (See Five Essays: Causation in Teaching & Learning )

The 3 Dimensions as Indicators of Human Capacities.

I suspect the demon is soon to be, if not already, loosed. There are too many highly intelligent and skilled people working in AI today who, but for a misorientation away from promising sources for modeling the human mind, would have come up with something by this time. (The present situation recalls the German attempt during WWII to develop an atomic bomb: they almost got it but for having gone down an unfruitful byway.)

Some promising sources, if one wants to create an artificial homunculus, are to be found in evolutionary biology, linguistic investigations and social, especially organizational theory. ( (See, for example, Joan Bybee (2010) Language, Usage and Cognition).

The three dimensions examined above lead fairly directly to those human – and not only just human – capacities supporting the intelligence with which our evolutionary history has endowed us. But that is grist for a later discussion.


For more relating to these issues, see Trait vs. Behavior: the sometimes non-science of learning