Everything in moderation. -- Kleovoulos o Lindios (6th century BC.)

From Mother's Milk to Hate-Monger's Bile. Bigotry promotes ideas of inferiority: moral, mental or physical. Bigotry develops from an almost universal, natural predisposition for affiliation into often extreme ideologies and practices of exclusivity, suppression and abuse. 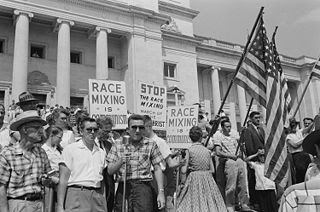 A child's natural attachment to its mother can, under certain circumstances of upbringing, develop into the participation in the abuse of other human beings because Mother or family didn't "like" them. As the song from Rogers and Hammersteins South Pacific goes:

Hate, in itself, may not be an evil. It is often a natural, understandable emotional response by those who suffer mistreatment. Hate gets to be morally suspect when it overgeneralizes to innocent people on the basis of characteristics common to both innocents and miscreants. But it is important not to treat every case of hatred, where inter-group relations are involved, as bigotry.

Extreme Group Antagonism: A root of evil? We grow up into groups often bound together by little more than habits of association built on fond hopes that, on occasion, may disregard bitter experience.

In many a society around the world, where people experience inequality, suppression and alienation, there will be those -- giving merely lip-service, say, only to equality, liberty or fraternity -- who believe they have found soul-mates merely because they all spout the same slogans.

Groups maintain their very existence through antagonism, competition, if not for survival needs, then for the attention of would-be members. So long as their participation is tolerable, these soul-mates look to build their self-esteem in friendly company pursuing what they take to be common concerns. (See SLOGANS: junkfood, dead-weight or poison? )

Provided, that is, that the cost of their membership is tolerable. The leadership gains in self-esteem, and very often in substantial benefits at the likely cost of its followers. (See A Leader's Primary Pursuit: Incumbency) The task of leadership, of providing motive for the organization, and for its continuation, is made easier, the more they can convince members that there is a threat from competing groups.

Enter, the Heroes? However, there are not a few who see this competitive dynamic as a primal evil. They seem to believe that doing away with all forms of competition would usher in peace and prosperity, as well as equality, liberty and fraternity the world over.

This is most likely a forlorn hope. The very virtues many of us pursue, e.g. respect for individuals, justice, rights, equity and the like rest on the idea of some basic competition among individuals, e.g. children for their parents attention, families for community status, personal self-esteem in comparison with friends and acquaintances.

This is an important conceptual point. Lacking some competition, i.e. desire plus impediment to access between groups or individuals, there would be no issues to be raised with respect to equality, or justice; nor any issues of liberty or fraternity.

Because groups often facilitate, or more important, restrict access to desired scarce objects or situations, membership becomes important in and of itself, both for followers and leaders. The values of belonging, group-membership, are inculcated not only within families, but in informal children's groups, in schools, through sports, in political parties, and, especially, in religions

The common sanction for deviants who resist the blandishments of belonging is love-withdrawal in one form or another. The common reward is an increase in esteem for the adherent. (A religious person might deprecate all of these as Sins of Pride, committing, ironically, the very sin he or she is criticizing.)

Would-be reformers require the existence of violators. The virtues they seek are to bring balance, fairness, to the competitions we cannot avoid. But there is a critical ambiguity in our notion of fairness to be taken into consideration: fair share vs fair play. (See Fair Share vs. Fair Play: Two Competing Conceptions of Justice )

A persistent confusion about the distinction between fair share and fair play confuses many attempts to compensate for past prejudices, particularly in policies of affirmative action. Another dilemma faced by uncareful reformers is that cures for the effects of discrimination are offered that threaten to spread the disease. (See Positive Discrimination )

Languages of Contempt. Almost every group uses words which help them celebrate themselves or, more usually disparage possible competitors. Social class or other in-group distinctions are expressed by such terms as mouth-breathers, not our kind, unhip commuter-student, hill-billy, redneck, townie, hippy, suits -- not to mention a whole host of words I will -- for the sake of not confronting readers with obscenities and vulgarities -- forego mentioning.

Ethnic differences, often thought of as racial differences, can be treated derogatorily with such terms as polak, wop, slant, spic and the like. Such terms can be very upsetting. When I taught in a junior high school many years ago I had a Puerto Rican colleague who formed a multi-ethnic club for students called SPanish , Indian and Colored. Parents found the acronym, SPIC, to be objectionable. They would not accept the teacher's explanation that he deliberately named the club SPIC in order to de-sensitize his students to the words being used as insults, inculcating, instead, pride of belonging. The parents thought such theoretical benefits to be unlikely, considering the insult potential that actually existed.

Political Correctness is an attempt to suppress the derogatory use of certain words in the hope that prohibiting the expression of inciting words will quench the contempt that might underlie them. So it is that no one -- in a public school, at least -- can be referred to as crippled, or stupid, or even ignorant. They are (merely) challenged. But so long as social practices of contact and association -- and funding thereof -- remain unchanged, word play is empty incantation.

The likely greatest influences on reducing some (while increasing other) kinds of social group conflict in the United States of America, I suspect, might well NOT have been policing, schooling, revivals, churches, or famous graduation speakers; but, rather MTV, new musical fads, sit-ins, and a general obstreperousness on the part of young people in challenging tradition, all this sound-bitten as sexndrugsnrocknroll. (Even so, the same kinds of debauchery their parents and grandparents indulged in can still be enjoyed but for a different content in a different manner.)

It is important to note that conflict may produce benefits as well as costs. The important question, however, is, Who benefits from the conflict and who pays the costs? (This idea may be followed up on here: The Functions of Conflict, )

Immorality and Extremism. Any intended intervention into peoples lives that might be based on possible untruths or misperceptions demands prior careful examination. This is so not only to make such intervention effective, but to forestall injustice. Proceeding with such an intervention is not only likely to be ineffective, but immoral, in the eyes of many. (See Intervention: helping, interfering or just being useless? )

Bigotries of all kinds support such flawed interventions. They are most most objectionable, not as individual hidden, inner seethings of hatred toward some target group, but as open action based on questionable assumptions of fact and biased perceptions of motive.

It is exhilarating for the bigot to feel contempt for others; it gives the illusion of raising the spirit, and invigorating the soul.

Nonetheless, bigotry is the curdled, rotted residue of in-group-love, socially fermented in falsehood and contempt that serves as a cheap, easy fix for diseased or underdeveloped self-esteem.

For examples and to examine these issues further, see Philosophy, Race and Language