"The Stimulus” remains a Hypothetical Construct; or, Guessing At What Elicits Behavior

(Researchers) … have implicitly allowed their own behavior to define the stimulus… --- Blough & Millward, (1965) "Learning: Operant Conditioning and Verbal Learning," in Annual Review of Psychology, Volume 16

Our conclusions, even at the level of measurement and scaling (which seems such a firm foundation for theory building), are already a consequence of theory. A measurement or scaling model is actually a theory about behavior, admittedly on a miniature level, but nonetheless theory. -- Clyde H.Coombs (1964) Theory of Data, 5. New York. Wiley.

What “stimulus” is it that provokes anyone to harm, to kill, even, another human being? We are continually bathed in emanations from our sun as well as from distant stars. Are they part of our “stimulus environment”? Is it sunspots that cause felonies?

Parents, teachers, professors, law enforcers, juries and judges -- are all, not infrequently, profoundly self-centered. They judge the behavior of others on the basis of how they, each one of them, imagine that they personally would have or should have perceived, reacted, thought and responded.

So it is that they praise or punish, pass or fail, arrest or dismiss, convict or exonerate, commit or constrain persons under their domination to praise or to humiliation, to liberty or to incarceration or death.

It’s all too easy to talk about stimuli; after all, we’re educated, aren’t we? We’ve got the vocabulary! But it can be very hard to say what particular events, or aspects of events, constitute a stimulus.

Want to see if a rat can distinguish Mozart from Schubert? Put it into a Skinner box, starve it a bit and then feed it only if it presses the bar when an interval of Mozart’s music, not Schubert’s, is playing. The discriminatory behavior of the rat will help us identify whether or not, and to what extent, the music is a stimulus. 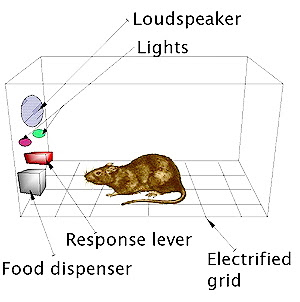 Having made the acquaintance of many an intelligent lab rat, I would bet its pressing responses would show a correlation with the snatch of music from the composer we have chosen to reward it for upon presentation. We will likely find out that some difference between the Mozart and the Schubert matters.

Is it color that matters? Not for us humans who hear only sound (but, perhaps so, if we have a rat with synaesthesia). Maybe one piece of music has a sound of a frequency that the other doesn’t. We’ll have to investigate that. The behavior per se doesn’t give us the answer. It just helps us focus the question: what precisely, if anything, is the stimulus?

And has the rat learned anything about Mozart or Schubert? Or even that one interval of sound or the other relates to them? What do you think? Wouldn't you have to put this to a test?

How much education, intellectual, physical or moral, is so much Schubert in a Skinner box?

For references and to examine the issues raised in this article further, see Can a Consistent Behaviorist Finish an Experiment?