Living in a Cloud of Buzzwords? Two possible remedies.

If a nation expects to be ignorant and free, in a state of civilization, it expects what never was and never will be. – Thomas Jefferson

More and more American students are getting college degrees. However, according to recent studies, fewer and fewer develop critical thinking skills along the way. But, can they ever stumble through the polysyllables!

Public political discourse in the universities and legislatures over the years appears more and more intensely to permit screaming epithets and insults, “liar,” “fascist,” “communist,” “pervert,” and the like, as though they were adequate rebuttals to proposals offered by people the screamers disagree with.

And more, we have graduates with advanced degrees that are "unemployable." And colleges who are called to "take responsibility" for this. Also, the unemployment roles teem with high-school graduates who are claimed to be near "Illiterate" and "ill-spoken." Not to mention young people of all ages who, their elders claim, lack an "education" in "values."

Is there a connection here? Have the tight education budget policies of most states, together with ever more lax admissions and graduation standards, finally paid off (for whom?) by producing an ever-increasing swarm of schooled ignoramuses satisfied with the empty paper they regard as a diploma? 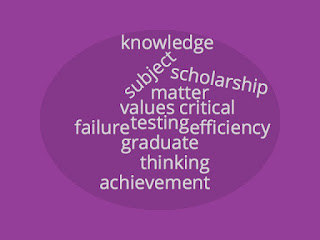 Don’t imagine this is only a public education issue. Embarrassments can also be found in both parochial and private education. Buzzwords and shallow thinking are standard fare not only on TV “talk” shows, but in op-ed columns of the “great” newspapers and journals.

Even many trained scientists, once they wander out of their specialty and into the areas of public policy, economics or ethics, tend to drift back into the cloud of buzzwords they were exposed to during earlier years in their development.

Sharpen your take on the differences between buzzwords, slogans and mottoes at Analyzing Buzzwords, Slogans & Mottoes: Exercises

Get down to practical issues by learning how to operationalize the contents of everyday items of contention. See Operationalization

(You might also want to see these how-to materials: Teaching Disciplined Hypothesis-Formation )