The Relativity of Exploitation: the overburdened “middleman.”


It burns with a white rage against societies as a whole, from military leaders and chiefs of state to (more common in our time) comfortable civilians in easy chairs, who send rough men out to serve their interests brutally, murderously (what is war?), and then —- when circumstances change and in the exquisite safety and fastidiousness of their living rooms they suddenly find these rough men’s actions repugnant -— and disown them. — Richard Grenier (“The Uniforms that Guard Us” 1981)

A leader without followers is simply a man taking a walk. — John Boehner. 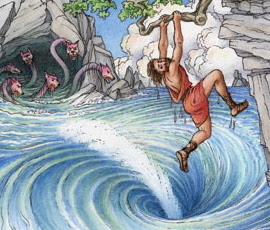 It is important to note right off that even more fundamental value assumptions underlie identifying what to count as benefits, costs and fairness. Although often treated as a tedious diversion from planned action, overlooking who shares such value judgments is often the cause of much unproductive dispute. (See The Nature of Consensus. This preliminary aside done for now, let's get on with the sorrows of middlemen.)

We are all, sometimes, “middlemen.” If we work with people we often act as mediators, even though we tend to think of mediators as outsiders brought into a situation with the specific task of reconciling a dispute. Mediators,especially if by occupation, are usually chosen for their being disinterested or “objective,” i.e. having little personal stake in the proceedings beyond their fees and professional reputation which might bias their judgment.

But when we, working with our fellows, function as mediators, the stakes for us are higher because our mediation affects the people we are involved with. This happens, for example, when we find ourselves "caught" in the middle, obliged to deal with a situation where our actions are constrained by those who obligate us, our superiors, as well as by those we depend on for their cooperation, our subordinates. (It is not whimsy that such a position, if official, is called “middle management.”)

Some examples of such an “informal” mediation-role is often provided by policemen, nurses, teachers, military personnel, office managers and the like. But in fact, being a middleman is relative. Those who give orders may also be required by their higher-ups to follow orders. Those at the relative bottom of the totem pole may also constrain what middlemen above them can do. Subordinates to middlemen can resist by on the spot re-interpretation, mass disregard, or even sabotage of the directives they are given. Policemen, parents, teachers, and business managers, constrained themselves by laws, policies and traditions, yet dealing with subordinates, i.e. the workers, children, patients or public, know this all too well.

Abusing the Middlemen. There is a not uncommon practice where those in charge sit buffered from the “front lines,” concocting or imposing “rules of engagement” which do not take into consideration the realities of the person-to-person confrontations that middlemen, the implementers of rules, regulations, laws and policies face. (See Buffering: Enhancing Moral Hazard in Decision-Making?

For example, I have talked with nursing and support staff in mental health services where aggressive patients occasionally harm other inmates and staff. They tell me of the insistence from state-level officials that they, the on-site staff, reduce the use of physical restraints disregarding any complaints about the dangers on-site staff face. Published statistical reports then tend to praise reductions in the use of physical restraints but to ignore increases in patient or staff injuries.

The Disregardful Treatment of Military And Law Enforcement Service People is another major problem. When people are under threat, they are effusively thankful for military or police intervention to protect them. Otherwise, many are very much less than sympathetic for the daily burdens such service people face.

Legislators, fulminating with modish “moral” fervor against some even minor misadventure will pass draconian laws with little consideration for the difficulties of their enforcement or for the collateral damage done to the good community relations those legislators otherwise give such vehement lip-service to.

Service personnel, upon retirement, find that legislatures are often much less ready to fund adequate long-term medical care or pensions than they were placing them in service in harm’s way.

The Emphasis of this essay, however is not on exploitation but on its relativity. Whoever acts as a “middleman” in a situation, and consequently risks exploitation, is not necessarily dependent on traditions or laws, but on contexts. For this reason I will rely on research described in Kenwyn Smith’s book,Groups in Conflict. Prisons in Disguise (1982), in which he analyzes groups as comprised by subgroups he calls Uppers, Middles, and Lowers. His model is more context-independent than something like “Directors-Administrators-Behavioral-Change-Targets” or “Leaders-Followers-Public.”(See Schneider&Ingram. ”Policy design: elements, premises and strategies",(1990).)

Here are some examples of other research fit into Smith’s tripartite scheme:

Outside Academia we can handily find:

Internal Conflict Situations Get Worse as the relationships from uppers to middlemen to lowers becomes formalized, either by tradition or law. There is what seems to be some kind of “social-class” bias in many organizations. The rule-of-thumb in institutions I have observed is:

Smith holds that if group members do not have sufficient experience at all three levels, Uppers-Middles-Lowers (not necessarily in the same group) because of legal or traditional practices, they develop attitudinal “encasements” which bias them against other levels with often mythological beliefs in the faults of individuals not in their level. Encasement may generate avoidable, costly and counter-productive conflicts. SNAFU may well be an encasement outcome. 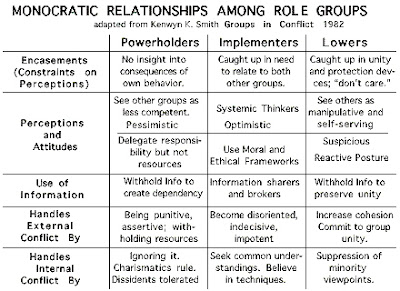 How do we avoid encasement? It is particularly difficult especially if tradition is strong and supported by law. Groups with rigid hierarchies become what Smith calls "monocratic." Monocratic organizations risk encasement. Jeffrey S. Nielsen in The Myth of Leadership (2004) suggests that organizations press to move from rank-based to function-based governance structures. That will provide members with experience of — and hopefully sympathy for — members participating at levels other than their own.

What About “Chain of Command?” To judge by the media, especially during a political season, one would think that very few people are acquainted with the notion of “chain of command.” On the one hand questions are asked why a president hasn’t raised the GNP; or why terrorists managed to elude the efforts of a homeland defense official. The regnant idea here seems to be command-effect model, like rolling a rubber ball down a playground slide. He who rolls the ball is held responsible for where it rolls to.

Links in the Command Chain are Actors, too. Despite the simplistic command-effect sound-bite model many people know that chains of command can be problematic. For example, without Congress’s help presidential efforts to get legislation passed can be stultified. Each “link” in the “chain of command” can have its own agenda. And not even brutal dictators may be able to long control opposition from within. Historical examples abound. One approach to understanding what connects the links in a chain of command is given by Schneider&Ingram. These are illustrated in the next diagram which begins with Uppers and ends in the actual outcomes effected by Lowers (presumably desired by the Uppers).

From Uppers (assumed producers of the Statute) through Middles (Administrators) to Lowers (the Target Population) exist connecting but possibly fragile threads of rules, tools (available resources) and assumptions resulting in Goals.

What Roles do the Middles Play? It is their task to negotiate to adjust the demands of the Uppers to the realities of using alloted resources and the Lowers as agents for the achievement of goals in an environment whose complexity the Uppers may well have underestimated.

Encasements tend not only to undermine the development of practically adequate, subtle understandings of the casual relations between commands and goals; but, also, overly politicize the tasks of the Middles — in accord with the Peter Principle: every one rises to his level of incompetence. — reducing their expertise to the crudest kind of amateurism and the opprobrium that it produces.

To see expansion on these issues, See LEADERSHIP AS USURPATION: the Grand Inquisitor Syndrome and Morality in Rank-Based Organizations