New teachers routinely have to deal with too many students, insufficient time and too few resources to thoroughly do their jobs. In short, they struggle with chronic, severe scarcity. And that struggle leads to a centrally important question. Whom can they help without unduly shortchanging others?

I’ve spent 46 years as a teacher educator and have long wondered why so many of my colleagues fail to alert novices to this most difficult issue in teaching? Namely, how to deal with chronic scarcity? 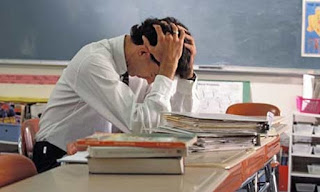 I imagine some ignore this issue because their ivory tower is too far removed from reality for them to realize it even exists. Others dodge it because they don’t want to scare off candidates and thus lose their job. Still others simply are sappy sentimentalists intoxicated by the fantasy that pathological optimism and unreserved self- sacrifice will overcome all.

This is the very nonsense that Hollywood peddles in feature films about education: self-sacrificing teacher surmounts every difficulty through force of will, uncommon devotion and relentless optimism. But this happy horse manure only works in the movies. In the real world even the most dedicated teachers routinely face situations where their resources are so inadequate to the task that difficult, if not impossible, decisions have to be made.

Imagine you are in your initial year of teaching in the state abandoned School District of Philadelphia. Thanks to conservative up-state legislators both your school district and your inner city school are catastrophically underfunded. That is why you have a class of 45 first graders. And, thanks to mainstreaming, it includes a child severely handicapped by Down syndrome. Some administrator decided that your class was the “least restrictive environment possible.” The youngster is low functioning and has serious behavior problems. His uncontrolled actions ruin many lessons and he assaults classmates who obstruct his desires. Sometimes he even strikes out for no apparent reason. Once, while seated in the Caring Circle, he even impulsively kicked a classmate in the face.

You can forget about getting him transferred to special education. Such assignments do not begin until second grade. You have no aide. They all disappeared, (along with the school nurse and guidance counselor) because of draconian budget cuts. When you try to teach this youngster something it takes an enormous amount of your time and yields comparatively little. Meanwhile you have 44 other inner city youngsters to teach, each with their own needs, problems, interests and abilities.

The plain fact is, in a situation like this there is no way to adequately address everyone’s needs. So what is one of the first things you must do? Figure out how to distribute your time and resources to maximize learning for the greatest number while dealing with the guilt that these imposed choices induce. Unfortunately, your training never even suggested you might face such choices, much less explored how to deal with them. The romantic drivel that was handed you is no help. You urgently need to know what to do.

Fortunately, there is a time-tested method for coping when urgent demands exceed existing supplies. It is called triage, and those dealing with mass disasters practice it routinely. Here is how it works. All the casualties are sorted into three categories. Those requiring immediate life-saving attention receive it. They are assigned first priority. Those that can wait must do so. The dying is left untreated until the needs of the others have been satisfied.

Emergency medical personnel simply cannot afford to pretend that their time and resources are limitless. This grim but essential allocation saves lives. Yet teachers in training are rarely taught that they too will likely lack the time and resources to do everything that needs to be done and thus must perform triage. This lack of candid preparation tacitly encourages new teachers to expend unjustifiable time and resources on the most needy youngsters, while neglecting those who would most profit from their help. Such misappropriation is understandable, but ethically indefensible. (1)

Ignorance of the necessity of triage causes many potentially good teachers to blame themselves when they cannot do everything that needs to be done. This is one reason why, five years in, nearly half of newly minted teachers will have either abandoned the occupation or transferred to a new school.

Moreover, maintaining the fiction that triage is never necessary plays right into the hands of the politicians who, by perennially short changing public education, put teachers in situations where triage is ethically unavoidable. Then, making matters worse, these very same politicos demand that no child be left behind or, currently, that every child succeeds.(2)

It is past time to end this humbug. Teaching is just like any other occupation requiring extensive time and resources. Short-changing either results in sub-optimal performance. But at least the very worst outcomes are avoided when triage is employed.

2. In December 2016 President Obama signed into law the Every Child Succeeds Act. It replaces the unlamented No Child Left Behind Act.