Are You a "Person of Principle"?

Transactional (in)Psychology. An interaction of an individual with one or more other persons, especially as influenced by their assumed relational roles of parent, child, or adult. -- Dictionary.com

Principles? Or Excuses? It's interesting that that the term "transactional", particularly in referring to President #45, has become his normal description. His admirers use it to explain his decision-making, finessing the issue of principle. His detractors use it to focus on (what they considers his lack of) principles.

Were the question of the title posed to you, you might respond, "It all depends on the principle," implying that there is a distance between being "principled" and being "unprincipled." I would tend to agree with you.

In the wider world, especially in this our multicultural, multi-religious, multi-political, more-or-less democratic United States of America in 2019, there are scads of principles, many of them contradicting others, or even themselves. 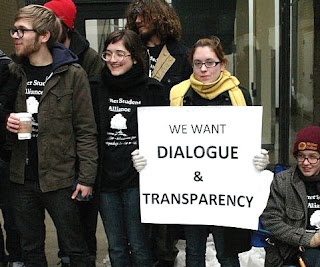 Do Principles Exacerbate Conflict? Despite this multi-dimensional pluralism (or, perhaps, because of it) we find many, many people who think it is important to be a principled person. They tend to believe that people who claim to be such are more trustworthy than those who are reticent to proclaim such.

Interestingly, it appears that the vaguer, the more-distant-from-everyday-goings-on the principle seems to be, the more likely it will have adherents. Such principles tend to become slogans of camaraderie, rather than moral or practical guides. This development is likely to bolster our democracy, rather than undermine it. It reduces the likelihood of conflict over specifics. Every successful negotiator recognizes this.


But What If You Consider Yourself Principled? (I personally do. I do not preach or practice, I believe, otherwise.) Then, can you answer the following questions about any of your principles?

Here are Ten Questions for Examining a Principle. Can You


Here are two examples of possible principles to consider:


A) An eye for an eye and a tooth for a tooth.
B) To get ahead, learn how to fake competence and passion.


Use the questions above to decide whether, and under what circumstances, you might accept or reject the principle.

For fuller explanation, and examples to practice on, see
What is it to Know How to Use a Principle?